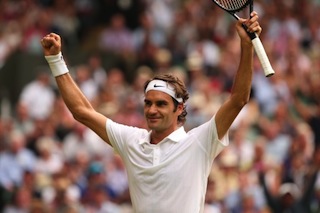 Roger Federer and Novak Djokovic face young and restless Milos Raonic and Grigor Dimitrov for places in the Wimbledon final on Friday as men’s tennis reaches a potentially game-changing moment in its history.

In the space of 24 hours at the All England Club, the big four of the game were reduced to the big two following the shock exits of Rafael Nadal and defending champion Andy Murray.

Suddenly, Dimitrov and Raonic have the opportunity to tip the balance in favour of the next generation by breaking down the door which has been frustratingly ajar for a decade.

But the odds are stacked against them.

Federer is a seven-time Wimbledon champion, the holder of a record 17 majors and will be playing in his 35th Grand Slam semi-final and ninth at the All England Club.

Djokovic’s 2011 Wimbledon title was just one of his six majors and he will be playing in his 23rd last-four at a Grand Slam and fifth in a row in London.

Dimitrov and Raonic, both 23, score nought on all of the above.

Federer, who was stunned in the second round last year 12 months after winning his seventh title, has a 4-0 career lead over Raonic, the first Canadian man in the semi-finals in 106 years.

Despite his desire to lift what would be a record eighth title, Federer insists he is happy to see a new breed coming through, even of they are already edging towards their mid-20s.

“It’s just hard breaking through. The points, you fetch them from semis on, not really quarters anymore like it used to be,” he said.

“So it’s hard I think for a youngster to win or be consistent over three, four, five matches in a row where the big points are.”

Federer will be the sentimental favourite on Friday against eighth-seeded Raonic whose quarter-final win over Australian teenager Nick Kyrgios, the shock conqueror of Nadal, was brutally effective but far from pretty.

Many watching saw the performance, which produced 39 aces, 73 winners and just 20 points conceded off serve, as a throwback to the bad old days when grasscourt tennis was a one-shot shoot-out.

“Well, he’s got a big serve. Clearly that’s what is most visible when you see him play,” conceded 32-year-old Federer.

“It keeps him in the match. I’ve played him in some interesting places like Halle (on grass) where we basically didn’t have any rallies whatsoever.”

Raonic insists his poor record against Federer will not be a factor when he becomes the first Canadian man since Robert Powell at 1908 to play in a Wimbledon semi-final.

“He’s gotten the better of me all four times. But I haven’t played him in more than a year and a bit, so I think I’m a different player,” he said.

“I’ve got in close with him in the past and I’ve found a lot of those things I can sort of pull away that give me a lot of belief that I can do this. I’ve got to step up and do it.”

Top seeded Djokovic was runner-up to Murray 12 months ago and he takes a 3-1 lead over 11th seeded Dimitrov into their semi-final.

Dimitrov, who will become the first Bulgarian man in the world top 10 next week, reached his first Grand Slam semi-final by defeating Murray in straight sets on Wednesday, a victory which finally allowed him to live up to the hype which had him nicknamed ‘Baby Fed’ in his junior days.

Transformed since hiring Australian coach Roger Rasheed, Dimitrov, who won the Wimbledon warm-up at Queen’s Club last month, is also getting him known for his tennis rather than just being the boyfriend of Maria Sharapova.

“Fear is out of the picture,” he said of facing Djokovic.

And Sharapova’s advice at this crucial moment?