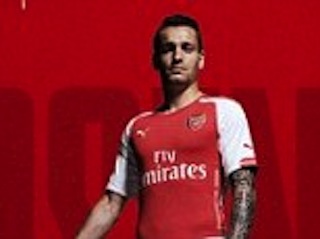 Arsenal completed their swoop for France defender Mathieu Debuchy from Newcastle United on Thursday in a deal reported to be worth around 15 million euros.

Debuchy has been a long-term target for Arsene Wenger and the Gunners’ manager finally got his man as the right-back put pen to paper on a long-term contract.

The 28-year-old, who was part of the French squad which reached the World Cup quarter-finals, is the ideal replacement for compatriot Bacary Sagna, who left Arsenal to join Premier League Manchester City on a free transfer last month.

Debuchy, who is reported to have cost the Gunners around £12 million ($20.5 million, 15.1 million euros), becomes Arsenal’s second signing since the end of last season following the £30 million arrival of Chile winger Alexis Sanchez from Barcelona.

“We are delighted to welcome Mathieu Debuchy to Arsenal,” Wenger told the club’s website.

“He has shown he can perform at the highest level with his club sides and also for France.

“He is a quality defender who has good Premier League experience and I’m confident he will fit in very well with us.”

Debuchy featured 46 times during an 18-month spell at Newcastle after spending the first nine years of his career with French side Lille.

His performances also earned him his international debut against Albania in October 2011 and he now has 25 caps for France.

Debuchy will join up with his new team-mates soon for pre-season preparations and is expected to make his debut at the Emirates Cup in the first weekend of August.

He admitted playing in the Champions League was a major incentive to join Arsenal.

“I’m very proud to be joining a great club like Arsenal and to wear its colours, it’s one of the biggest clubs in the whole world,” Debuchy said.

“I’m looking forward to working with Arsene Wenger and to helping the team build on last season’s FA Cup success.

“Playing again in the Champions League is a big excitement for me and I will do my best to help Arsenal compete for trophies.”