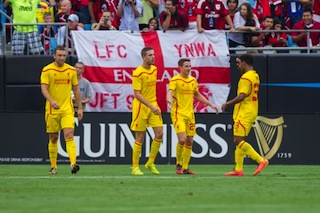 Joe Allen opened the scoring in the first half and Spanish striker Suso scored the second in the second half for the Reds, as AC Milan finished the exhibition tournament without a point.

Liverpool’s pressure paid off with Allen’s goal in the 17th minute. After divesting Michael Essien of the ball, Allen drove into the penalty area and fired a shot that hit the post.

Raheem Sterling’s attempt from the rebound was deflected back by keeper Christian Abbiati, but Allen was in place to finally slot the ball home.

Liverpool had a chance to double the score in the 28th minute, but Rickie Lambert’s spot-kick was saved by Abbiati and it wasn’t until the 90th minute that Suso added the second goal.

“I thought it was an excellent test for us,” Liverpool manager Brendan Rogers said. “I thought we showed real good composure and control with the ball .. and I thought defensively we were really strong and solid.”

In addition to enduring another demoralizing defeat, AC Milan saw defender Mattia De Sciglio laid out flat by a collision with his own goalkeeper Gabriel in the second half.

Gabriel was able to continue in goal, but De Sciglio had to leave the contest.

Liverpool had already been assured of going through to Monday’s match after English Premier League champions Manchester City fell 5-4 on penalties to Olympiakos after a 2-2 full time draw in Minneapolis.