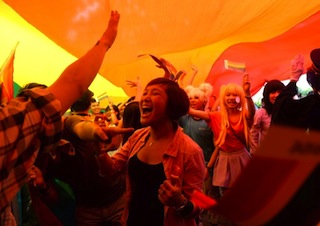 Around 300 activists led a colourful parade through Hanoi on Sunday in the nation’s largest ever gay pride event, as communist Vietnam shows signs of increasing tolerance of sexual difference.

The city streets were awash with rainbow flags, as a mainly young crowd cycled and danced through the capital urging an end to discrimination against the lesbian, gay, bisexual and transgender (LGBT) community.

Homosexuality remains taboo in Vietnam, but a series of gradual advances, including the removal of fines for same-sex wedding parties, have been welcomed by the LGBT community in recent years.

In 2012 lawmakers even briefly considered legalising gay marriage — a move which would have thrust the authoritarian country to the forefront of gay rights in Asia — but stopped short.

Sunday’s event was the third gay pride parade in Vietnam and attracted a wide range of people including local activists, foreigners and curious by-standers.

“I’m here for the rights of homosexuals. I want them to be treated fairly like everyone else,” Le Kieu Oanh, a 20 year-old art student told AFP.

Another activist praised the government’s move to end curbs on same-sex wedding ceremonies — which are symbolic but non-legally binding.

But “public opinion is not ready for same-sex marriage,” the sociologist added on condition of anonymity.

One of the parade organisers, Nguyen Trong Dung, said homosexuals need to be “accepted by their families” before wider society ends its prejudice.

“If they are recognised by their own families, they have a high chance of integrating into society,” he added.

Demonstrations of any kind are tightly controlled in Vietnam, especially following riots in May in protest at China’s placement of an oil rig in Vietnam’s East Sea or commonly known as South China Sea.

Police, however, did not intervene in Sunday’s parade.