US Ebola outbreak 'possible' but not large - CDC chief 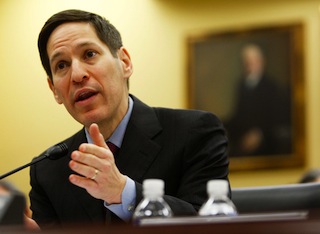 Tom Frieden, Director US Centers for Disease Control and Prevention

People with symptoms of Ebola will inevitably spread worldwide due to the nature of global airline travel, but any outbreak in the US is not likely to be large, health authorities say.

Already one man with dual US-Liberian citizenship has died from Ebola, after becoming sick on a plane from Monrovia to Lagos and exposing as many as seven other people in Nigeria.

More suspected cases of Ebola moving across borders via air travel are expected, as West Africa faces the largest outbreak of the hemorrhagic virus in history, said Tom Frieden, the head of the US Centers for Disease Control and Prevention.

The virus spreads by close contact with bodily fluids and has killed 932 people and infected more than 1,700 since March in Sierra Leone, Guinea, Nigeria and Liberia.

“It is certainly possible that we could have ill people in the US who develop Ebola after having been exposed elsewhere,” Frieden told a hearing of the House Subcommittee on Africa, Global Health, Global Human Rights and International Organizations.

“But we are confident that there will not be a large Ebola outbreak in the US.”

Frieden also told lawmakers that people with symptoms of the disease would inevitably spread worldwide, and indeed numerous countries have already begun testing patients with fever and gastrointestinal distress who have recently traveled to West Africa.

“We are all connected and inevitably there will be travelers, American citizens and others who go from these three countries — or from Lagos if it doesn’t get it under control — and are here with symptoms,” Frieden said.

However, a CDC spokesman later clarified that Frieden was not saying the United States was bound to get Ebola cases.

“It is inevitable that people are going to show up with symptoms. It is possible that some of them are going to have Ebola,” said CDC spokesman Tom Skinner.

There is no treatment or vaccine for Ebola, but it can be contained if patients are swiftly isolated and adequate protective measures are used, Frieden said.

Ken Isaacs, vice president of program and government relations at the Christian aid group Samaritan’s Purse warned that the world is woefully ill-equipped to handle the spread of Ebola.

“It is clear that the disease is uncontained and it is out of control in West Africa,” he told the hearing.

“The international response to the disease has been a failure.”

Both fell ill with Ebola while treating patients in the Liberian capital, and their health is now improving.

“One of the things that I recognized during the evacuation of our staff is that there is only one airplane in the world with one chamber to carry a level-four pathogenic disease victim,” Isaacs said.

He also said personal protective gear is hard to find in Liberia, and warned of the particular danger of kissing the corpse farewell during funeral rites.

“In the hours after death with Ebola, that is when the body is most infectious because the body is loaded with the virus,” he said.

“Everybody that touches the corpse is another infection.”

Ebola can cause fever, muscle aches, vomiting, diarrhea and bleeding. It has been fatal in about 55 percent of cases during this outbreak.

Sawyer had traveled to Nigeria from Liberia via Togo’s capital Lome, and was visibly sick upon arrival at the international airport in Lagos on July 20.

He died in quarantine on July 25.

As many as seven people who had close contact with Sawyer have fallen ill with Ebola, and one has died, Nigeria’s Health Minister Onyebuchi Chukwu said.

A Saudi Arabian man who had recently traveled to Sierra Leone and showed Ebola-like symptoms died Wednesday of a heart attack, but authorities in Riyadh did not reveal the results of Ebola tests.

Ebola first emerged in 1976, and has killed more than 1,500 people since then. Within weeks, the death toll from this outbreak alone is expected to surpass that number.