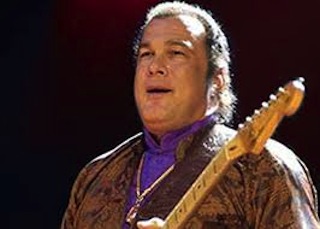 Hollywood tough guy and musician Steven Seagal played a weekend concert in the Black Sea peninsula of Crimea, appearing on a stage adorned with the flag of pro-Russian separatists in Ukraine.

Seagal and his blues band played late Saturday at a bikers’ show held in the city of Sevastopol, home to Russia’s Black Sea Fleet.

The martial artist has come under fire for supporting Russia’s March annexation of the peninsula from Ukraine, a view which saw him bounced from the line up at a Estonian blues festival this summer.

At the corner of the stage hung the black, blue and red flag of the Donetsk People’s Republic (DNR), declared independent by separatist pro-Russian rebels fighting to break away from Ukraine.

Fans waved Russian and DNR flags as Seagal sang and played his guitar.

The United States and European Union have imposed sanctions on Russia over its annexation of Crimea and for allegedly providing weapons and support to the rebels in eastern Ukraine.

In a March interview with a Russian newspaper Seagal was quoted as saying that President Vladimir Putin’s desire to protect Russians in Crimea was completely reasonable.

Seagal said in the newspaper interview he considers Putin, with whom he has promoted martial arts in Russia, a friend and would like to consider him a brother.

Putin’s spokesman Dmitry Peskov last year told reporters that the Russian president and Seagal have been friends “for a long time” and regularly meet.

Russian media also reported that Seagal put on Putin t-shirt given to him by the concert’s organiser.

In television footage broadcast on a channel owned by Russia’s defence ministry, Seagal can be heard telling his hosts about his Russian ancestors.

In the March newspaper interview Seagal said he doesn’t rule out eventually seeking Russian citizenship in addition to his US citizenship.