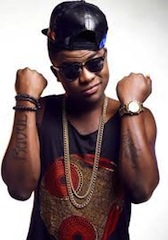 The 23-year-old hit maker’s new auto came courtesy of Baseline Music, which also provided him an all furnished service apartment in Lekki.

He has since released a hit single, Shake Body, under the label’s imprint.

Skales announced weeks ago that a lucky fan would have the opportunity to win $10,000 in an online competition that will see fans dance to his hit single Shake Body and upload it on skalesmusic.com. The lucky winner will emerge through popular polls.