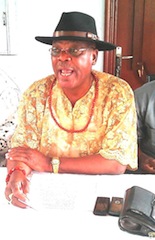 Senate President, David Mark, on Sunday expressed sadness over the death of General Patrick Azazi (rtd), describing him as a dependable colleague, a fine officer and a gentleman.

In a statement issued in Abuja by his Chief Press Secretary, Paul Mumeh, he said late Aziza was one of the best and fertile minds the Nigeria military ever produced.

Mark acknowledged the positive contributions of Aziza to the development of Nigeria, adding that, he excelled in all assignments he handled.

Mark also said that even in trying times of the nation’s contemporary history, the late military officer stood for peace and unity of the country.

“He was one of our best. He stood for the unity and indivisibility of Nigeria. He demonstrated unwavering commitment to the nation. He was a patriot to the core,” Mark said.

Mark noted that even in retirement, Aziza’s people recognised his sterling qualities and elected him the President General of Urhobo Progressive Union (UPU) in Delta, a position he held until his death.

He condoled with the government and people of Delta, especially the Aziza’s family, praying that the Almighty God should grant them the fortitude to bear the loss.