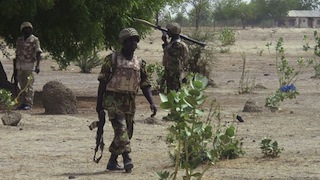 The Defence Headquarters has said in Abuja on Saturday that troops of the Multi-National Joint Task Force (MNJTF) has cleared a terrorists camp in Buduram, north of Doron Baga in Borno.

A statement by the Defence Headquarters said the dawn raid operation was carried out on Friday 15 August.

The statement said the troops raided the camp where the terrorists were re-grouping and re-organising to carry out a reprisal attack after being routed in Doron Baga in a previous encounter on 10 August.

According to the statement, 17 terrorists died in the operation, while some who escaped into neighbouring islands in the Lake Chad Peninsula are still being pursued.

It noted that calm had been restored to Doron Baga after the attack by the terrorists who infiltrated the community with some of them disguising as women in hijab.

It added that five of the terrorists died in the counter offensive to defend Doron Baga by troops of the MNJTF.

According to the statement, many of the inhabitants of the community who fled into nearby bushes for safety are now returning.