Costa off the mark as revamped Chelsea down Burnley 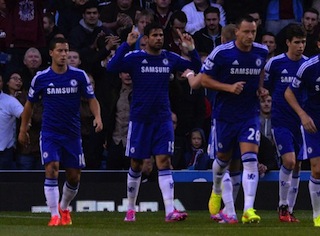 Diego Costa began to pay back his hefty transfer fee with a debut goal for Chelsea as they recovered from the shock of going behind to seal an emphatic 3-1 win over Burnley on Monday.

Having failed to bring a trophy to Stamford Bridge last season for the first time in his two spells in charge, Blues boss Mourinho – and possibly club owner Roman Abramovich – will not tolerate such relative failure again.

The arrival of Costa therefore came as a serious show of intent and Chelsea’s determination to dethrone reigning champions Manchester City was further underlined as they went top of the table after a dominant performance inspired by a masterful debut from Spain midfielder Cesc Fabregas.

“When you come to a place like this and you are a goal down against a difficult team then players can get down heartened and lose faith. Burnley are a direct and physical side but overall we had good control and we showed moments of class,” Mourinho told Sky Sports.

“I agree completely with Cesc as man of the match. He controlled the tempo of the game and was responsible for the best phase of our play.

Burnley briefly looked like upsetting the odds when they took the lead in the 13th minute.

Five years ago it had been Robbie Blake who had been Burnley’s hero with a thumping volley and Arfield’s strike didn’t suffer much by comparison.

The opening began with a corner which was only cleared as far as Burnley defender Michael Duff and he headed the ball back to Matty Taylor.

Taylor’s cross eluded the bodies waiting in the penalty area but not midfielder Arfield, who controlled the ball 20 yards out and sent a dipping volley beyond Belgian goalkeeper Thibaut Courtois, selected ahead of Petr Cech, and into the roof of the net.

Burnley couldn’t have dreamt of a better start, but the goal served only to wake up Chelsea and after Costa’s equaliser four minutes later there was going to be only one winner.

With none of Chelsea’s strikers reaching double figures in the Premier League last season, the Spain international was recruited by Mourinho to give his side more of a cutting edge and he delivered straight away, driving home a loose ball after Burnley captain Jason Shackell had deflected a cross from Ivanovic against a post.

And four minutes later Chelsea were in front thanks to a flash of inspiration from former Barcelona star Fabregas.

His first-time pass which split Burnley’s defence was sublime and Schurrle took full advantage of the service as he ran through to side-foot into the net.

Burnley’s back four, the same one which had the best defensive record in the Championship last season, couldn’t cope with Chelsea’s movement and the vision of Eden Hazard in particular.

And even the basics of defending a corner deserted them when Ivanovic volleyed in Chelsea’s third goal from inside the six-yard box following Fabregas’s corner 11 minutes before half time.

It could have been worse had Costa been awarded a penalty rather than a booking when he went to ground under slight contact from goalkeeper Tom Heaton before the third goal went in.

But rather than capitulate, Burnley started the second half positively and almost found a route back into the game through Arfield whose curling shot was superbly saved by Courtois.

That was the only scare for Chelsea, though, as they cruised home, saving their energy for tougher battles ahead.