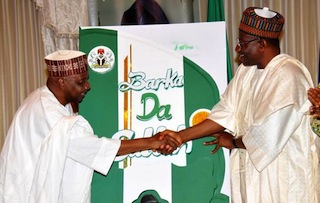 President Goodluck Jonathan on Saturday in Abuja restated that the activities of terrorist groups across the world had nothing to do with Islam.

The president stated this when a delegation of the Muslim community led by Vice President Namadi Sambo paid him Sallah homage at his official residence in the Presidential Villa.

Jonathan maintained that there was nothing Islamic about the atrocities being perpetrated by Boko Haram in Nigeria or Islamic State (ISIS) militants in Iraq who claimed to be fighting for the propagation of Islam.

“What is happening globally now has no religious basis. Only yesterday, a British aid worker was slaughtered by ISIS and that is not Islamic.

“Boko Haram killing innocent children and women in market places, in mosques and schools definitely has nothing to do with religion,” he said.

The president noted that this year’s Sallah celebration was significant, citing certain natural coincidences which, according to him, showed that something good was happening to Nigeria.

“This year is quite significant in terms of the celebration of Sallah, because the Day of Arafat coincided with a Friday, and from what I was told it takes a long time to have that coincidence.

“And remembering the fact that 2014 is our centenary year, it shows that something good is happening to this country.

“We may have our challenges as other nations, but when things begin to happen in a particular way, I begin to see light at the end of the tunnel.

“A number of things that have to do with our belief system suppose to encourage us to see our neighbours as ourselves,” he said.

While congratulating Muslims all over the world, the president urged them to use the period to seek God’s mercy for those hiding behind religion to perpetrate evil.

He restated his belief in Nigeria, emphasising that the country had a lot to offer not only to its citizens but also to the entire world. “Whatever obstacles we see are very ephemeral and part of history of nation building. If you read the history of all nations, there is no nation that does not pass through some challenges.

“But, they got over them and moved ahead; I think we are getting over our problems,” he said.

Earlier, vice president, Sambo had prayed for peace and unity in the country. He also prayed that Allah would grant the president the strength, wisdom and good health to lead the country out of its current challenges.

NAN reports that the Day of Arafat falls on the 2nd day of pilgrimage activities in Saudi Arabia. On this day, the pilgrims make their way from Mecca to a nearby hillside, Arafat, to pray for peace.