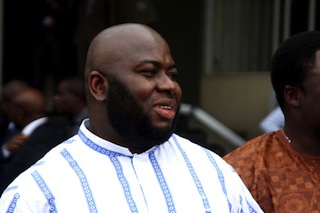 The All Progressive Congress (APC) has written the Presidency, Police and State Security Service over statements attributed to the leader of the Niger Delta Peoples Volunteer Force (NDPVF), Mr. Mujahid Dokubo-Asari, threatening to deal with the National Publicity Secretary of APC, Alhaji Lai Mohammed.

The letter signed by the National Secretary of the party, Hon. Mai Mala Buni reads: “The attention of our party has been drawn to comments made by the leader of the Niger Delta Peoples Volunteer Force (NDPVF), Mr. Mujahid Dokubo-Asari, that included a threat of violence against our National Publicity Secretary, Alhaji Lai Mohammed.

“The threat, contained in an interview granted to the online newspaper Premium Times by Mr. Asari Dokubo on Friday, Oct. 17th 2014, follows a press statement which was issued on behalf of the party by Alhaji Lai Mohammed on Oct. 8th 2014, asking the Federal Government to explain the reported presence of Mr. Asari Dokubo on the plane that transported US$9.3 million cash to South Africa.

“In the interview, Mr. Asari Dokubo said while he would adopt a civilised response to Mr. Mohammed by first suing the APC spokesperson for his remarks,” adding that, Dokubo warned that should the courts fail to deliver justice, he will resort to “self-help by using his hands and any other means to deal with Mr. Mohammed”.

“We find this threat totally abhorring, dangerous, unacceptable and uncivilised, and therefore wish to request that you call Mr. Asari Dokubo to order and invite him to explain what he means by his threat to resort to self help. We have attached a copy of the said interview to this petition.

“We take the unwarranted threat very seriously, in view of the antecedents of Mr. Asari Dokubo and his propensity to violence, and will definitely hold him personally responsible if anything untoward happens to our National Publicity Secretary, Alhaji Lai Mohammed.

“Since ours is a country that operates under the rule of law rather than the laws of the jungle, we believe anyone who is aggrieved over any issue should resort to the courts to seek redress,” the statement read.