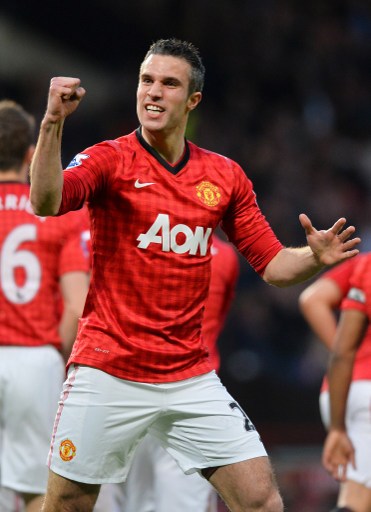 Didier Drogba scored his first Premier League goal since his return to Chelsea, and his first for the club in two-and-a-half years, but a dramatic late equaliser from Robin van Persie earned Manchester United a point in an exciting 1-1 draw at Old Trafford on Sunday.

The Dutchman was on hand in the 94th minute after Branislav Ivanovic brought down Angel Di Maria near the corner flag, earning his second booking and a red card in the process.

Di Maria’s resulting free-kick found Marouane Fellaini whose powerful header was superbly saved by Chelsea goalkeeper Thibaut Courtois, only for van Persie to show lightning quick reflexes and power the rebound back into the Chelsea goal from a dozen yards.

Until that point, Jose Mourinho had seemed likely to secure a victory over Louis van Gaal, the manager for whom he had worked for three years as a coach at Barcelona, and collect the three points which would have moved his side six points clear at the top of the table, eight ahead of defending champions Manchester City.

Drogba had not been much in evidence until the 53rd minute goal that was a vintage example of the finishing that made him a Stamford Bridge legend.

The breakthrough came from a corner, won after David de Gea made a superb save to keep out Eden Hazard after the midfielder had exchanged passes with Drogba and bore down on goal only to be denied from 12 yards.

However, Chelsea did not have long to wait to make amends. From Cesc Fabregas’s corner, Drogba lost his marker Rafael and steered a powerful, angled header into the United goal via the head of van Persie.

It was a stunning start to the second half following an even opening period.

Van Gaal and Mourinho hugged warmly in the United dug-out before proceedings got underway at the end of a week in which the two high-profile managers had spoken extensively of their mutual respect.

Chelsea enjoyed the bulk of the possession although de Gea had little to concern him, a fact that gave United renewed belief as the half progressed.

Adnan Januzaj received and returned a pass to van Persie whose shot was superbly saved by Courtois before di Maria’s cross was met by the Dutchman’s header, forcing the Chelsea goalkeeper into a catch at full stretch.

As the half wore on, however, there were signs that United were beginning to struggle to cope with Chelsea’s attacking threat, not least at a 36th minute Fabregas corner when Chris Smalling appeared to wrestle Ivanovic to the ground, only for referee Phil Dowd to ignore the visitors’ appeals for a penalty.

Before the interval, Oscar also set up Drogba for his first chance of the game although the Chelsea legend shot too close to de Gea from only 10 yards.

Chelsea looked a more potent attacking force at the beginning of the second-half and Marcos Rojo was forced into early action to deny Hazard at the end of an enterprising move.

Fellaini just missed the target from the edge of the area, following a lay-off from Smalling, but the goal followed within a minute.

With Mourinho spending the entire 90 minutes on his feet in the technical area — a stark contrast to van Gaal who remained seated throughout — the Chelsea manager might have enjoyed a more relaxing final half hour if Willian’s 22-yard shot had not been well held by de Gea.

Ivanovic also threatened with a powerful and skilful run into the United area before his driven cross-shot just evaded Hazard and the far post.

Willian also came close again, this time creating space for himself on the edge of the United area before planting a weighted shot just wide.

Such missed opportunities would prove costly as United pressed for the equaliser, with van Persie forcing a strong save from Courtois and substitute James Wilson heading onto the roof of the net in the closing stages.