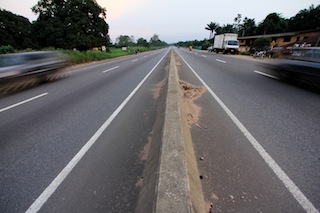 Agbro who is the coordinator in charge of South-South Zone 2 of FERMA which covers Edo, Delta and Ondo states, also lamented the high and excessive speed of heavy truck drivers on the highways which he said was a major cause of potholes which degenerate into failed sections.

The FERMA boss disclosed this while speaking to journalists in Benin. He called for collaboration of all stakeholders in order to reduce the rate at which highways across the country wear out, just as he warned against burning of tyres and drain stuffing which he said destroys the highways.

“Burning of tyres on the highways causes potholes which later expands to failed portions. The used tyre deposited directly into our drains is also another menace. This leads to problems which directly affect our drainage systems and the resultant effect is spill on the road causing potholes degenerating to failed sections,” he said.

While giving assurance that the agency will not relent in tackling defecation on federal highways, Agbro however advised the general public against dumping refuse on the drains, adding that is also a threat to good roads‎.