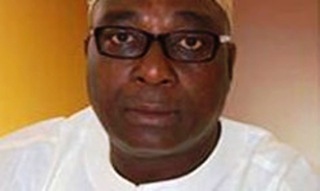 Ogun State Deputy Governor, Prince Segun Adesegun, has warned his boss, Governor Ibikunle Amosun, that he may not return as governor of the state in 2015 as his second term bid may fail.

He gave the warning in a letter he wrote complaining that Amosun has sidelined him. The letter dated 24 October, 2014, detailed the alleged injustice the governor meted out to him and concluded that Amosun’s second term bid may fail.

The letter confirmed speculations in the Government House that all is not well with Amosun and Adesegun, both members of the All Progressives Congress, APC.

In the 10-paragraph letter, a copy of which was obtained by our correspondent in Abeokuta Wednesday morning, the deputy governor accused his boss of starving his office of funds and allocation of old vehicles to his office, among other things.

Adesegun added in the letter that his September and October feeding and out-of-pocket and sundry allowances had not been paid.

He claimed that the governor had failed to deliver on his promise. “Last year, in my letter to your good self on the affairs of the state, I concluded by reminding you that at a meeting held in February, 2011 at Alhaji Rafiu Ogunleye’s house, while you were the governorship candidate of the ACN, you called me aside and promised me that I will enjoy my tenure as your deputy but since then I have not felt the benefit. I write to say that rather than improving, the situation is worse,” Adesegun claimed.

He also wrote in the letter that during this year’s Eid-el-Kabir and Eid al-Fitr festivals, funds were released to government functionaries except him and his aides.

Adesegun also alleged that seven months ago, electricity supply to his official residence was cut off “because the state government owed the then Power Holding Company of Nigeria.”

He said he had had to spend an average of N30,000 daily on diesel to provide electricity for his residence. Adesegun wondered why his lodge was not initially connected to the state mini-power plant even “when it is on record that several government premises, including private residences and organisations enjoy power supply from the plant. I informed you personally (and severally) during the State Executive Council meetings, requesting necessary action from the appropriate quarters. Up till now, I am still living in darkness.

“Of course, your Excellency knows that to date, I remain the deputy governor in Nigeria without a portfolio, in spite of entreaties made to you from various quarters. Worse, several attempts made by me for the office of the deputy governor were rebuffed by your good self. And I keep wondering why this is so.”

Adesegun also alleged that while the July 2014 monthly running costs of ministries, departments and agencies in Ogun State were duly paid, that of his office was withheld.

He further alleged that “another very relevant issue is my official car. The engine knocked in December last year. Your Excellency will recollect that you were formerly using the car and that it was when you rejected it that it was transferred to me. So, when it had problems, I thought you will appreciate and understand my plight, rather you ignored me.

“I had cause to remind you many times, but nothing was done. I resorted to using my personal car as back-up even when I was aware that you were giving vehicles, including Custom-made bulletproof vehicles to others. It was when a Good Samaritan bought a Tundra Truck for me that you deemed it fit to send a Toyota Prado XL V4 engine to me in late August.

“My convoy of old vehicles break down intermittently when travelling. On numerous occasions, we have had cause to stop while on a journey to effect repairs on vehicles . Obviously, these vehicles are to be changed every two years under best practices, even when newly bought. These vehicles in my convoy were used by the last administration and transferred to me.

“Your Excellency may also note that the fund you approved for my vacation with some members of my immediate family and two aides in August 2014 is yet to be paid. Please recall that I discussed the vacation with your good self in May, and you graciously conceded that I should forward a memorandum in June, only for it to be approved in August.

“Despite your approval, the fund was not released. I made several spirited efforts to no avail. It got to a stage that I was being bounced between you and the Commissioner for Finance. I eventually proceeded on the leave without collecting a dime.

“I am therefore constrained to ask if the non-payment of these allowances is as a result of the state government not being able to meet her financial commitments. Or is the state financially bankrupt that it cannot meet its responsibilities?”

Adesegun concluded by asking the governor to fear God and ended his letter with an ominous warning that Amosun’s second term bid may fail.

Speaking with our correspondent on Wednesday morning on the issue, the State Commissioner for Information and Strategy, Alhaji Yussuph Olaniyonu said he was not aware of Adesegun’s letter.

“I have told The Punch when they contacted me that I don’t know anything about the letter and could not react to what I have no knowledge about,’ Olaniyonu said.some of the governor’s aides said Adesegun is trying to cause confusion because he is moving to another party.

One of the Senior Special Assistants, SSA, to the governor from Ogun East Senatorial District declared that the deputy governor is trying to cause confusion as he is seeking for sympathy votes for his new party.
“I was told that they have all moved to SDP and he is the likely governorship candidate for the party. He is trying to use that letter as a stepping stone to feel the pulse of the people about their love for him and probably get sympathy votes through that in 2015.

“Let me tell you this, there is no going back on our decision to support the governor for his second term bid. It is not today that the crisis started. It has been a long time palaver and he is now looking for a way out,” the SSA revealed.

Another top political office holder in the state who is a Chairman of one of the statutory boards maintained that no amount of intimidation, humiliation and blackmail would stop the governor from being re-elected back into office come 2015.

Some of the governor’s aides are of the opinion that the matter should not be treated with glove kids and they called on the governor who is in Abuja for the APC mini convention to react appropriately to the matter as it involves his ambition of coming back into the Oke Mosan office in 2015.

Our correspondent, while speaking with many of the political appointees in the state Wednesday, was told that the crisis may spell doom for APC in the state in 2015 if not tactically managed.

Others lambasted the deputy governor for his action, asking why is he crying foul at this time.

P.M.NEWS gathered that Adesegun has already dumped APC and has pitched his tent with the new party, Social Democratic Party, SDP, whose members are loyalists of the former governor in the state and founder of the party, Chief Olusegun Osoba.

Sources said he may likely be given the governorship ticket of SDP in 2015. Loyalists of Osoba who have been out of favour with Amosun in the state have been linked with many political parties before the die was cast on Monday when news filtered round the town that they have moved en masse to SDP.

The strained relationship between the governor and his deputy could be traced to when the governor was picked as the Action Congress of Nigeria, ACN, (now APC) governorship candidate in the 2011 election and Adesegun, the Ago Iwoye-born former Commissioner for Works in the state, was chosen as his deputy.

The development that did not go down well with Amosun at that time. Amosun had then wanted to pick Mrs Elizabeth Sonubi, who is now the State Commissioner for Women Affairs and Social Development as his deputy but the ACN leadership at that time rejected the proposal and ‘imposed’ Adesegun on him.

Reacting to the letter on Facebook, a former Ogun State government insider, Wale Adedayo wrote: “Ogun State APC split into two with Osoba and Amosun separately leading the factions. But if the truth must be told, even long before the arrival of APC on the scene, the Action Congress of Nigeria (ACN) was not one in Ogun State. The aggrieved Deputy Governor, Prince Segun Adesegun, belonged to the Osoba side of the divide, named Matagbamole.

“As of today, Matagbamole has already split into three – a group led by Aare Remilekun Bakare joined the Peoples Democratic Party (PDP) last week. The mainstream, led by Chief Olusegun Osoba, which includes the Deputy Governor, Prince Segun Adesegun, has melted into Chief Olu Falae’s Social Democratic Party (SDP). Of course, a number of us decided to remain in the APC, preferring to fight from inside.

“But I did not read this background in the letter published by The Punch. The letter read as if there has been no internal political war, and that Egbon Adesegun and the others have not aligned with the SDP after the registration of Action Group of Nigeria (AGN) did not materialise. The context should have been in the story, that the Deputy Governor, from all indications is no longer a member of the APC, which produced the governor of the state.

“These contexts should have been part of the story to enable readers make an informed choice. Egbon Adesegun is getting ready to be the senatorial candidate of the SDP in next year’s election. Maybe, maybe, maybe if Egbon had remained in APC, the national leaders would still have done something. But that is a very big maybe from this side of the divide.”