Glo Xchange ready for take off, recruits over 2000 agents 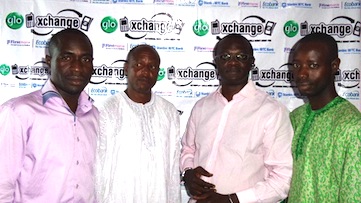 The last training sessions for prospective Glo Xchange agents was held over the weekend and it was well attended by enthusiastic prospective agents who thronged the town hall meetings in Sokoto, Katsina, Ekiti and Ebonyi states.

As Globacom rounded off the town hall trainings it also recruited of over two thousand small scale traders and operators of Small and Medium Scale Enterprises (SMEs) as last mile agents of the mobile money services .

The town hall meetings featured capacity building lectures, how to function as Glo Xchange mobile money agents as well as mode of operation and how the agents can start the business in their locality.

Olaigbe Temitope of M5 Direct Limited who spoke from the Ado-Ekiti centre of the town hall meetings said that the project was good for Nigeria’s cashless policy as it would make business transaction much easier while Ogunsakin Ganiyu of Lemissco Communications Iyin road, Basiri, Ado-Ekiti opined that the Glo Xchange scheme would simplify money transfer.

In Sokoto, Alhaji Abdul Malik of Sokoto South Local Government Area said: “with Glo Xchange the issue of filling bank tellers and travelling several kilometres’ to banks from our various villages will become a thing of the past.”

Mallam Yusuf Maidama of Tangaza Local Government Area, Sokoto enthused, “My old parents in the village will no longer worry about how to get money from banks which are located far away. I also will not have to join long queues to send money to my suppliers to buy my wares”.

At the Grace Court Hotel, Abakaliki, Ebonyi State, Akwa Okorie from Ishiagu said: “Glo Xchange will help make monetary transaction easier, especially in rural areas” while Aja Godspower from Afikpo concurred that it will ease the problems associated with unavailability of financial institutions in the rural areas”.‎

In her testimony, Ezeugo Jennifer from Nkaleke in Abakaliki said it is the most thoughtful financial and business platform innovation of 2014. “This will not only simplify financial transactions but will also go a long way to make business transactions much easier,” she enthused.

The Glo Xchange mobile money has the unique advantage of servicing the about 140 million unbanked Nigerians who may however be part of the 129million telephone subscribers in the country.