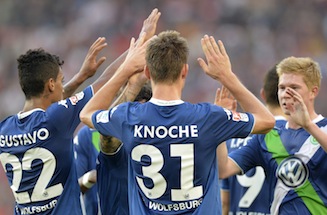 VfL Wolfsburg climbed to second in the Bundesliga on Saturday with a 4-0 hammering of VfB Stuttgart as ex-Chelsea midfielder Kevin de Bruyne tore the hosts’ defence to shreds.

De Bruyne netted his first goal of the season and created another two as Wolves picked up their sixth straight win in all competitions.

The 23-year-old de Bruyne was in the thick of things, providing a free-kick for Robin Knoche to head Wolves into a 2-0 lead at the break after Croatia international Ivan Perisic’s opening goal for the guests.

Belgium’s de Bruyne then scored his first goal of the season when he volleyed home from close range on 48 minutes before robbing Moritz Leitner of possession and providing Perisic with his second goal on 88 minutes.

The victory leaves Wolves just a point behind leaders Bayern Munich who host Borussia Dortmund in the evening’s key clash with 14 points separating the two teams.

Jurgen Klopp’s Dortmund started the Allianz Arena match in the relegation places having dropped to 16th.

A Rafael van der Vaart penalty sealed Hamburg’s 1-0 win at home to Bayer Leverkusen which lifted the hosts out of the bottom three and dropped Dortmund into the relegation spots.

Hamburg won a bad-tempered affair which saw nine yellow cards — six were handed out in the first half alone — after two separate scuffles broke out.

Freiburg, who are at Cologne on Sunday, went bottom of the table after Werder Bremen moved up to 17th as caretaker coach Viktor Skripnikas got their first win of the season with ex-Chelsea and Wigan striker Franco di Santo netting both goals in a 2-1 victory ovber Mainz.

Mainz took the lead when Japan’s Shinji Okazaki scored his sixth league goal of the season to become the Bundesliga’s joint top scorer.

But Bremen hit back in their first match since Robin Dutt was sacked as di Santos headed home after his penalty attempt was blocked by Mainz goalkeeper Loris Karius just before the half-time break.

The Argentina international then claimed his second of the game and sixth of the season when he netted a final pass from Felix Kroos, younger brother of Real Madrid’s Germany international Toni Kroos.

Hanover 96 went sixth in the table thanks to an own-goal from Eintracht Frankfurt defender Alexander Madlung just two minutes from time sealed a 1-0 victory.

Borussia Moenchengladbach can reclaim second and equal the club’s 40-year-old record of 17 games unbeaten when they host Hoffenheim, who have also yet to lose this season, on Sunday.

On Friday, Roberto di Matteo picked up his third win in four matches as Schalke 04 coach as Klaas-Jan Huntelaar scored their first-half winner in a 1-0 victory at home to Augsburg.

The result masked a poor performance from the Royal Blues who have moved up from 12th to seventh in the table since di Matteo took over from Jens Keller.