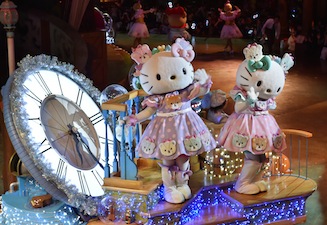 Hello Kitty, Japan’s global icon of cute, marked her 40th anniversary on Saturday with a human-size version of the feline character regaling fans at an upscale Tokyo department store and a theme park.

The moon-faced creation that adorns everything from pencil cases to pyjamas the world over, began her birthday as a one-day manager of the Mitsukoshi department store in Tokyo’s glitzy Ginza district.

Clad in pink from head to toe — including a child-like bow — a human-size Kitty showed up at an in-house meeting at the store, drawing cheers and applause from a horde of employees.

As she bowed, the employees bowed.

The mouthless character did not speak but waved and struck poses, sending many on the floor blurting out “kawaii!” (Japanese word for cute).

As the store opened, she greeted the first wave of customers, many of whom hugged the character and posed for pictures.

Kitty, dubbed the eternal “girl” by her creator, also celebrated her birthday with fans at Sanrio Puroland, a theme park west of Tokyo.

Surrounded by hundreds of fans, she made dance performances with other characters including her twin sister Mimmy.

On the other side of the Pacific, a Hello Kitty Convention in the Little Tokyo district near downtown Los Angeles has opened for a four-day run through the weekend, expecting to draw some 25,000 fans.

The first merchandise with Kitty was a coin purse launched in Japan in 1975.

She now appears on more than 50,000 products in 130 countries and territories — including a dress made for pop diva Lady Gaga.