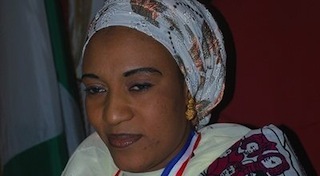 The wife of Borno Governor, Mrs Nana Shettima, on Sunday in Maiduguri disbursed N5 million to 500 women as an intervention in the fight against poverty in the state.

She said the gesture was aimed at providing some takeoff capital for women who engage in petty trading.

NAN reports that each of the traders got N10, 000, while a 25-litre jerry can of cooking oil each was also given to the women.

Shettima lamented that several women had lost their means to livelihood because of the prevailing security challenges facing the state.

“The situation has forced many to engage in street begging to feed their families.”

The wife of the governor expressed the hope that the cash donations would help them to start small businesses and quit street begging.

She also prayed that the lingering security challenges would end soon so that the state’s economy would also jack back to life.

Mrs Sera Mamza, one of the beneficiaries who spoke on behalf of others, thanked Shettima for the donations.

She expressed the hope that the money would be utilised well to restart their businesses.