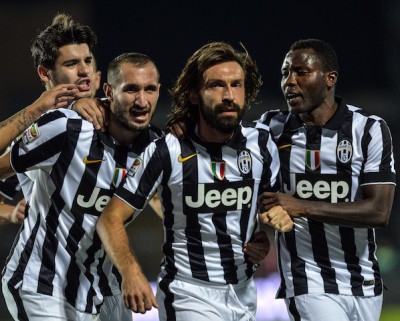 Champions Juventus restored their three-point lead at the top of Serie A on Saturday with a 2-0 win at struggling Empoli while rivals Roma slumped to a 2-0 defeat to a rapidly-improving Napoli.

In Saturday’s late game Inter were stunned 2-0 at Parma.

Andrea Pirlo and Alvaro Morata got the goals for Juve in the space of 11 second-half minutes in the first meeting between the two sides since 2008.

Pirlo opened the scoring with his first goal of the season, a sweet free-kick which dipped over the wall and past Davide Bassi in the Empoli goal.

Former Empoli player Claudio Marchisio then hit the woodwork before ex-Real Madrid star Morata made it 2-0 with a left-foot curler.

Parma, meanwhile, moved off the bottom of the table with a shock 2-0 home win over Inter, who thus maintained their record of never winning three games consecutively under coach Walter Mazzarri.

Midfielder Paolo De Ceglie grabbed both goals for Roberto Donadoni’s side, in the fifth and 76th minutes to secure the team’s second win of the season.

Napoli and Roma met at Napoli’s San Paolo stadium for the first time since the death of 31-year-old Ciro Esposito, a Napoli fan who was killed by a hardline Roma ‘ultra’ on the fringes of the Italian Cup final last May.

Approximately 600 police were deployed in and around the stadium but the drama was played out exclusively on the pitch as Napoli dominated from the outset to rubber-stamp their return to form following a difficult start to the season.

“I’ve said for a long time we need to take it one game at a time. I don’t deserve the credit for this win, it’s all down to the players,” Benitez told Sky Sport.

Napoli bossed the entire first half and Higuain gave the hosts a three-minute lead with an acrobatic bicycle kick that beat Roma ‘keeper Morgan De Sanctis from inside the area.

It was the Argentinian’s fifth goal inside a week, Higuain having scored a hat-trick last weekend in a 6-2 win over Verona and one from the penalty spot in a 1-1 draw away to Atalanta in midweek.

Higuain set up Callejon for Napoli’s second five minutes from time to rubber-stamp their return to form following a dismal start to the campaign.

“At the start we got our approach all wrong. In the first half we hardly won any of our tackles.”

“It’s the first time it’s happened, but we have to make sure it’s the last time,” he added.

Napoli should have put the match to bed well before the half-time whistle.

Apart from two half-chances by Alessandro Florenzi just before the hour, Roma struggled to pose any real threat after the restart, prompting Garcia to replace the right winger and captain Francesco Totti with Juan Iturbe and Mattia Destro on 65 minutes.

However their arrival failed to spark Roma who found themselves facing just their second defeat of the campaign when Radja Nainggolan was dispossessed in midfield by Walter Gargano.

Higuain, who had failed to find the net in Napoli’s opening eight league games, threaded a perfect ball through for Callejon to beat De Sanctis from the edge of the area first-time for Napoli’s second five minutes from time.

It was Callejon’s eighth goal of the campaign and left the Spaniard top of the league scoring charts.

Napoli’s fifth win in 10 games means they move up to third place but are seven points behind Juventus.