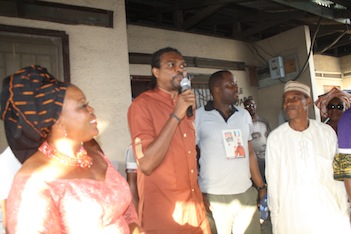 Kanu told the gathering that he believes Desmond Elliot will make the constituents and the people of Surulere proud when elected into the Lagos House of Assembly, just as he has made Nigeria and Nigerians very proud as a good representative of the country abroad. He made the declaration at forum organised for Desmond Elliot to meet a group of Widows in Surulere.

While addressing the crowd, Elliot spoke extensively on the several community based projects he has been sponsoring over the years, some of which include; sponsoring of over twenty (20) students’ tertiary education at the National Open University, Talent Sponsorship for the Entertainment Industry, working in partnership with some financial institutions to give loans to micro businesses and medical support. He also spoke on the many social plans his party, the All Progressives Congress, has for Nigerian women.

Prior joining politics, Elliot had established a humanitarian foundation designed to meet the need of poor communities in Liberia, Sierra Leone, Uganda and some other African communities. He believes that his humanitarian services as well as charity towards education positions him as the choice candidate to address the needs of the people, especially those in his constituency when elected their representative in 2015.

Elliot who is contesting for the post of Representative at the Lagos State House of Assembly (LAHA) on the platform of the APC, Surulere Constituency 1 has received immense support from his immediate Nollywood community, his numerous fans and major APC party caucuses within the local government since flagged off his campaign.