Cavani scores as PSG go through to round of 16 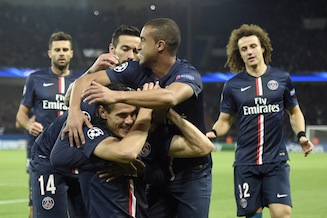 Paris Saint-Germain eased into the knockout stage of the Champions League for the third season running on Wednesday with an unspectacular 1-0 win against Cypriot side APOEL at the Parc des Princes.

Having needed 87 minutes to get the breakthrough against the same opponents when the French giants triumphed 1-0 in Nicosia a fortnight ago, Edinson Cavani required a mere 57 seconds this time, ‘keeper Urko Pardo allowing his shot to cross the line for PSG’s fastest ever Champions League goal.

The home side should have won by a greater margin but coach Laurent Blanc will be pleased that they got the job done, as they extended their unbeaten record this season and made it five victories in a row in all competitions.

The result, coupled with Barcelona’s 2-0 win away to Ajax in Amsterdam, means PSG and the Catalans are both already through to the last 16 with two games to spare in Group F and first place will probably be decided when they meet at the Camp Nou next month.

Paris, quarter-finalists in each of the last two campaigns, have yet to really impress this season but they were a level above a hard-working APOEL side throughout this encounter after getting off to a dream start.

Many latecomers were still taking their seats inside the Parc des Princes when the Ligue 1 club opened the scoring before a minute had been played, Cavani controlling a low ball into the box from right-back Gregory van der Wiel, turning and seeing his shot helped on its way over the line by Pardo for his eighth goal of the season.

The Cypriot champions were forced to rethink their game plan after that and a brief spell of pressure almost produced an equaliser in the 11th minute.

Home goalkeeper Salvatore Sirigu reacted well to keep out a header from Brazilian midfielder Vinicius following Mario Sergio’s corner, with captain Nuno Morais blazing the follow-up over from inside the six-yard box.

However, as they chased the game, the visitors were vulnerable to being hit on the counter-attack and they were fortunate not to concede again with 17 minutes played as Cavani headed against the post after superb build-up play down the right flank involving Javier Pastore and Lucas.

Lucas, the Brazilian winger, can be an immensely frustrating player at times but is a joy to watch when in full flow and he was unlucky to see one shot whistle just past the post before forcing a save out of Pardo at the end of a driving run.

Pardo also denied Cavani and Ezequiel Lavezzi before the interval to keep APOEL in the game against a PSG side once again missing talisman Zlatan Ibrahimovic, who has not played for seven weeks because of a persistent heel problem.

The pattern remained the same after the restart as Pardo made one notable stop from Pastore and Cavani shot wide from another van der Wiel centre, but PSG were happy just to see the game out.