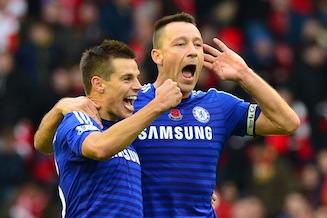 Diego Costa scored his 10th goal of the campaign as Premier League leaders Chelsea continued their unbeaten start to the season by winning 2-1 at Liverpool on Saturday.

But Gary Cahill equalised almost immediately for Jose Mourinho’s Chelsea before Costa slammed home 23 minutes from time to silence Anfield and provisionally increase his side’s lead at the summit to seven points.

“It was a fantastic performance. The players as individuals all had a great performance and as a team they were in control,” Mourinho told BT Sport.

“One point at Anfield, most teams would accept that as a great result. This team did not accept that and I am really, really pleased.”

Runners-up to Manchester City last season, Liverpool have now lost three successive games in all competitions and trail Chelsea by a huge 15 points.

Liverpool manager Brendan Rodgers felt that his side have should been awarded a late penalty after a shot from Gerrard struck Cahill on the arm in front of the Kop.

“We worked so hard in the game, but we need those decisions that are obvious,” he said.

“It was a clear, clear penalty. I was very disappointed because the players gave everything in the game. We deserved at least a point for sure.”

Rodgers restored a host of the first-team players controversially rested for the midweek loss to Real Madrid in the Champions League and saw his team go ahead in the ninth minute.

Can had a shot deflected over by John Terry in the first minute, but Chelsea did not heed the warning and when he took aim from similar range moments later, the ball cannoned off Cahill and into the net.

But within five minutes Chelsea were level, after a goal that required the aid of goal-line technology.

Simon Mignolet parried from Terry at a corner and although the Liverpool goalkeeper got his body fully behind Cahill’s follow-up, Hawk-Eye replays showed that the Belgian had carried the ball over the line.

While Chelsea finished the first half strongly, they were indebted to goalkeeper Thibaut Courtois for getting down sharply to thwart Philippe Coutinho and Raheem Sterling either side of half-time.

Having been embroiled in a physical tussle with Martin Skrtel for much of the game, Costa provided a reminder of his predatory instincts to settle the game in the 67th minute.

After eluding Coutinho on the Chelsea left, Cesar Azpilicueta saw his cross pushed out by Mignolet, but Costa was in the right place to rattle a half-volley into the net from close range.

Second-place Southampton will attempt to return to within four points of Chelsea when they host Leicester City later on Saturday.