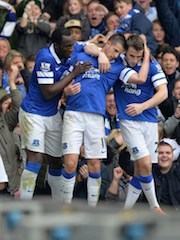 Leighton Baines’s late penalty earned a point for Everton in a 1-1 Premier League draw at Sunderland on Sunday.

Baines’s third goal of the season for Roberto Martinez’s mid-table side cancelled out Seb Larsson’s second-half opener for the hosts, who remain in trouble near the bottom.

Connor Wickham was fortunate to escape a red card for tripping Seamus Coleman as the defender ran onto a Samuel Eto’o pass.

The successful penalty saw Baines atone for his part in Sunderland’s 67th minute goal, as free-kick specialist Larsson found the net for the first time since the opening day draw at West Bromwich Albion in August.

Both sides pushed for a winner as the contest wore on, with Everton’s James McCarthy cleared an injury-time Wes Brown header off the line.

A lively second half was in contrast to a first 45 minutes where the major incident of note was the sight of Everton’s former England midfielder Gareth Barry being carried off on a stretcher with his right leg in a brace following a reckless early challenge from Jordi Gomez, who earned a booking.

Sunderland midfielder Gomez, who played under Everton manager Martinez at Wigan, was fortunate to escape a second caution when he dived blatantly in an effort to earn a free-kick on the edge of the Sunderland area as Phil Jagielka closed in on the Spaniard.

Well-placed referee Lee Mason rightly chose not to penalise the blameless Everton defender, which led to the question as to why he declined to punish Gomez for going to ground far too easily.

Clear-cut chances proved hard to come by, Wickham heading a corner from the recalled Adam Johnson onto the roof of the net from close range as Sunderland threatened from set-pieces.

Gomez almost cashed in on his reprieve by nearly opening the scoring at the end of the first half.

Darron Gibson, on for Barry, was dispossessed by Larsson in the area, the ball breaking for Gomez, whose low shot was well saved by the feet of Everton keeper Tim Howard.

Romelu Lukaku had been a largely peripheral figure, but belatedly imposed himself on the contest at the outset of the second half, when it took two fine saves from Pantilimon to maintain the stalemate.

The former Manchester City keeper spread himself well to scoop the ball away from Lukaku after the Belgian out-paced Brown to Liam Bridcutt’s misplaced backpass.

Pantilimon did even better shortly after to touch a powerful Lukaku shot against the post after the forward rounded Santiago Vergini to fire an angled drive towards goal.

The Romanian was rewarded when Larsson stepped up to beat Howard from almost 25 yards with a curling effort into the right-hand corner of the US keeper’s goal after Baines fouled substitute Will Buckley.

Baines, however, made the most of his opportunity to make amends with 14 minutes remaining, choosing power over precision to find a way past Pantilimon.