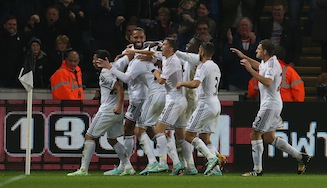 Arsenal missed the chance to go fourth in the English Premier League after Swansea came from behind to beat the Gunners 2-1 with two late goals at the Liberty Stadium on Sunday.

Victory saw south Wales club Swansea leapfrog Arsenal into fifth place as Arsene Wenger’s side suffered only their second league defeat of the season following their loss to leaders Chelsea.

Arsenal were on course for victory when Alexis Sanchez scored his sixth goal in four games in all competitions when he swept in Danny Welbeck’s cross to set the seal on a flowing counter-attack in the 63rd minute.

But Swansea equalised 15 minutes from time when, from fully 25 yards out, Gylfi Sigurdsson curled in a brilliant free-kick which kept going past the right hand of helpless Arsenal goalkeeper Wojciech Szczesny and into the top corner.

Substitute Bafetimbi Gomis, who’d only just been sent on by manager Garry Monk, rose high above the Arsenal defence to head in his first Premier League goal after a fine run and cross by Jefferson Montero.

Earlier, Newcastle United’s impressive revival continued with a 2-0 victory away to West Bromwich Albion that took them into the top half.

Goals from Ayoze Perez and Fabricio Coloccini at The Hawthorns saw Newcastle, who struggled at the start of the season, extend their unbeaten league run to five straight games — a sequence that now includes four successive victories.

Perez put Newcastle ahead on the stroke of half-time when, from 12 yards out, he backheeled in Daryl Janmaat’s cross.

Janmaat was again the provider as Newcastle doubled their lead in the 62nd minute when Magpies captain Coloccini headed in his cross.

One meagre consolation for Arsenal was that bitter north London rivals Tottenham Hotspur also lost on Sunday, with Stoke’s 2-1 win at White Hart Lane seeing them move up into ninth spot.

Former Barcelona star Bojan Krkic scored his first Premier League goal in fine style to give Stoke a sixth-minute lead at White Hart Lane when he ran at the retreating Spurs back four before unleashing a hard, low shot into the corner.

Stoke were 2-0 up in the 33rd minute when Mame Diouf squared the ball to Jonathan Walters, who finished from close range.

Tottenham pulled a goal back in the 77th minute when Nacer Chadli met Rose’s cross with a powerful finish.

But Tottenham’s hopes of a draw were dented when they had to play the final five minutes down to 10 men after defender Kyle Naughton was sent off for a crude foul on Victor Moses.

“I was really pleased with the manner of the performance today,” Stoke manager Mark Hughes told the BBC.

“We were always a threat, we had a good shape about us, when we had the ball we broke with pace and precision and scored two goals as a consequence.”

Tottenham boss Mauricio Pochettino made no attempt to hide his annoyance, saying: “It was disappointing and frustrating. A very bad result.

Sunday’s other early kick-off saw Sunderland and Everton share the points in a 1-1 draw at the Stadium of Light.

Seb Larsson broke the deadlock with a 67th-minute free-kick but Everton were level in under 10 minutes when Seamus Coleman was brought down by Connor Wickham and Leighton Baines scored from the resulting penalty.