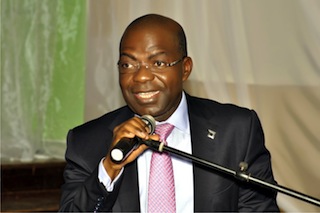 The All Progressives Grand Alliance (APGA) welcomed former CEO/MD of Diamond Bank, Dr Alex Otti after the banking guru defected from the People’s Democratic Party (PDP) to contest for the governorship position.

Prior his switch, the national leader and chairman, Board of Trustees of APGA, Chief Willie Obiano, who is also the governor of Anambra state has repeatably warned that under his watch, APGA will capture more states in the southeast.

Since his resignation from the Diamond Bank, Dr Otti has been widely accepted as the right man to fill the vacuum in Abia State.

It would be recalled that Anambra-born business mogul, Prince Arthur Eze, stated that Abia state needs more positive change when he was invited as a Special Guest to mark the state’s 23 years anniversary.

Otti believes he is the change that Abia state needs and he has called on all the citizens of the state to vote him into government in 2015.