Arsenal star Ozil out for another seven weeks 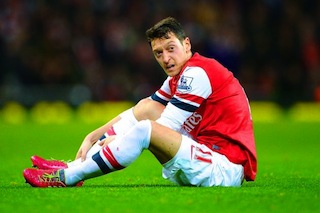 Arsenal’s German midfielder Mesut Ozil will be sidelined for a further seven weeks with a knee ligament injury, he announced on Wednesday.

Ozil, 26, already out of action since early October, said in Berlin, where he was receiving an award: “I’ve already been injured for five weeks and I’m going to be out for another seven. It’s a long process.

“Injuries are part of football, but life goes on and you have to keep your spirits up.”

Ozil has already missed Germany’s Euro 2016 qualifiers against Poland and Ireland and will also miss Friday’s game with Gibraltar and the friendly against Spain four days later, as well as Arsenal’s last two Champions League group matches against Borussia Dortmund on November 26 and Galatasaray on December 9.

“Injuries are part of football, but life goes on and you have to keep your spirits up,” Ozil added.