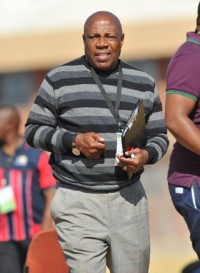 South Africa coach Ephraim ‘Shakes’ Mashaba has said that his side will avoid a decade run of defeat against Nigeria in the final 2015 Africa Cup of Nations qualifying game in Uyo on Wednesday.

Mashaba’s men, who were held to a goalless draw by Nigeria in the first meeting in Cape Town, said despite having already secured their place at the continental event in Equatorial Guinea next year, they will not take the game lightly.

South Africa are yet to win in a competitive encounter with Nigeria since readmission to international football after Apartheid.

Bafana Bafana recorded a 2-1 home victory over Sudan in Durban to seal their qualification opening a four points gap atop of Group A, while Nigeria propped into second after a 2-0 away win in Congo to garner seven points.

Mashaba admitted his side will face a tough challenge when they come up against the African champions who will be desperate to pick the maximum points in Uyo.

“Nigerians don’t want to lose against South Africa. That alone will make this match a tough one and we also have the assignment to break the hoodoo that we always lose when we play against them,” Mashaba told journalists after the team’s final training session in Pimville, Soweto on Monday.

“We have to go out there positive and believe we will do well. We are defending well but there are still some things we need to do, especially in the middle of the park where we are not picking opponents tight and that will cause us problems especially against a team like Nigeria which is very good in that area,” he concluded.

The encounter will be played at 6pm local time, which is 7pm South African time at the Ibom International Stadium in Akwa Ibom State.