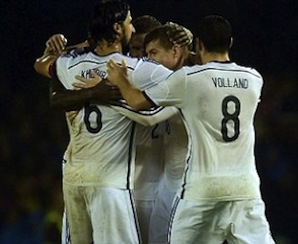 Germany edged the big match between the last two World Cup winners on Tuesday as Toni Kroos’s last-gasp goal handed them a 1-0 friendly victory over Spain in rain-lashed Vigo.

The goal came in the 90th minute of a game between two experimental sides when Spain’s substitute goalkeeper Kiko Casilla was guilty of a howler, fumbling Kroos’s innocuous looking shot from the edge of the area.

Real Madrid keeper Iker Casillas had started for Spain in his 160th international appearance, but made way for his near namesake Casilla with 20 minutes to go.

Spain’s best chance had come ten minutes earlier as Barcelona’s Pedro tried to chip Germany keeper Ron-Robert Zieler of Hannover 96, who produced a fine stop on what was actually a quiet night for him.

Germany have been suffering something of a World Cup hangover with a run of poor form that saw them lose in Poland in a Euro 2016 qualifier.

While Spain have also been far from their own rampant form that saw them win Euro 2008 and 2012 plus the 2010 World Cup in South Africa, and neither side is leading it’s Euro 2016 qualifying group.

“We had as many chances as they did and all in all it was a close game. We’re in a transition period and we can continue to look to the future with optimism,” said Del Bosque.

Only four of the players that started the 2014 World Cup final for Germany, Benedikt Hoewedes, Kroos, Thomas Mueller and Mario Goetze started the game and it was a similar case for Spain.

Bayern Munich striker Mueller, who had scored ten times during 2014 for the national team, limped out of the game on 27 minutes after a clash with Sergio Ramos, to be replaced by Karim Bellarabi.

The heavy rain dampened what might have been expected to be a party atmosphere given the profile of the teams, but the biggest cheer of the night came with the news striker Nolito of local outfit Celta would start the game.

Nolito sent a free-kick wide late in the first-half and was also in a position to score from another chance when ruled off-side on his international debut.