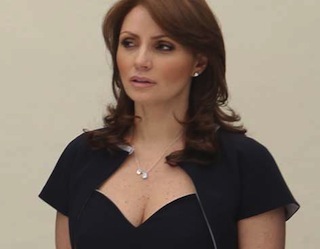 Mexico’s first lady announced late Tuesday she was putting her multi-million-dollar private mansion on sale to end a controversy over her purchase of the property from a government contractor.

Pushing back at suggestions of a conflict of interest, Angelica Rivera issued a video on her website to say she had bought the house with her earnings from her days as a popular soap opera star.

Criticism of the mansion in a posh Mexico City neighborhood has been an extra headache for President Enrique Pena Nieto, already struggling with protests over the government’s handling of the presumed massacre of 43 college students.

“In the face of accusations that have put my honour in doubt, I want to make it clear before all Mexicans that I have nothing to hide, that I have worked all my life and that thanks to that I am an independent woman,” Rivera said.

“I have always acted with integrity,” she said, adding that she had declared nearly $10 million in revenue in 2010, for which she paid almost $3 million in taxes.

Her explanation came hours after a visibly irate Pena Nieto said his wife would publicly clear up the “falsehoods” in the report by prominent journalist Carmen Aristegui.

“I will not allow this issue and finger-pointing to put in doubt the trust that the majority of Mexicans have put in me,” Pena Nieto said in a speech in his native central State of Mexico.

Rivera said she was selling the house — which she said was bought for $4 million — “because I don’t want this to continue being a pretext to insult and defame my family.”

But Rivera’s explanation did not appear to refute the main facts in the report, including that the house was built by and was still in the name of a government contractor’s subsidiary.

Revelations about the “White House” were made last week on Aristegui’s website, which said the house was built by a subsidiary of Grupo Higa, a company headed by Mexican mogul Juan Armando Hinojosa.

Rivera acknowledged that the house was built by Hinojosa’s real estate company after she told him she was looking for a new property.

Grupo Higa had won lucrative public works contracts when Pena Nieto was governor of the State of Mexico. Earlier this month, it was part of a Chinese-Mexican consortium that won a $3.7 billion bullet train contract.

But three days before the Aristegui report came out, Pena Nieto abruptly canceled the train deal, putting him in an awkward position as he traveled to summits in China.

The government said it wanted to avoid any questions about transparency after the opposition raised questions about why only one group, the one led by China Railway Construction Corp., had bid for the contract.

To counter critics, Rivera, who is known as “The Seagull,” released the contract she signed with the real estate firm Ingenieria Inmobiliaria del Centro for the 1,414-square-meter property, as well as her tax returns.

She said the mansion was custom-made on a property adjoining another house that had been given to her by her former employer, the Televisa network.

She signed a deal to buy the property for $4 million over eight years at an interest rate of nine percent. She said she has paid a third of the loan.

“I am here today to defend the integrity of my children and my husband,” Rivera said.