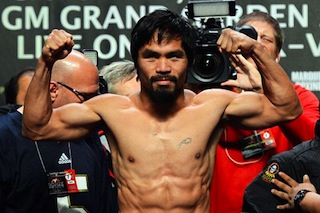 Manny Pacquiao weighed in at 143.8lb Saturday for his welterweight world title defence, but his opponent Chris Algieri had trouble on the scales ahead of Sunday’s fight.

Undefeated American Algieri could not make the catchweight limit of 144lb and was still 0.20lb over after a second attempt despite stripping down to his bare essentials at the Saturday morning weigh-in (Friday night in the US) at the Venetian Macau’s Cotai Arena.

Algieri (20-0, 8 KOs) was given two hours to sweat off the remaining weight and came back for a third attempt which saw him finally go under at 143.6lb.

Despite the hiccup, which would have thrown Algieri’s final preparations for Sunday’s fight slightly behind schedule, the former kickboxer from Long Island predicted he would win.

“I did all the hard work I needed to do,” said Algieri. “I know I can count on my skills to do it. This is dream come true and I’m ready to rock.”

Pacquiao (56-5-2, 38 KOs) has been relaxed and confident all week in Macau. The Filipino eight-weight world champion has been impressing all who have watched him train with the intensity and power he has shown in his workouts.

“I’ve been preparing like the early days in my career,” said Pacquiao at the weigh-in. “I want to get back the hungriness and the aggressiveness that I had when I was young.”

Earlier this week Pacquiao had said he enjoyed fighting unbeaten boxers, such as Algieri, because he liked to teach them what it is like to lose. But on Saturday the Sarangani province congressman was more diplomatic.

Before Pacquiao and Algieri square off for the World Boxing Organization (WBO) welterweight title at around noon local time (0400GMT) Chinese double Olympic gold medallist flyweight Zou Shiming (5-0, 1 KO) will take on Thailand’s Kwanpichit Onesongchaigym (27-0, 12 KOs) in a 12-round final eliminator for a world title shot.

Kwanpichit, an uncanny Pacquiao look-alike dubbed ‘mini-Manny’ by the media, and Zou both weighed in right on the 112lb flyweight limit.

There are two other world title contests on the undercard.

World Boxing Association super lightweight champion Jessie Vargas from Las Vegas (25-0, 9 KOs) weighed in on the 140lb limit for his defence against Mexico’s Antonio DeMarco (31-3-1, 23 KOs) who was a little lighter at 139.3lb.