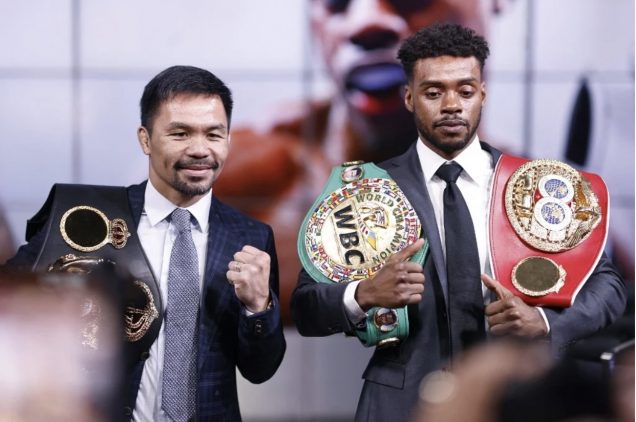 Pacquiao and Errol Spence - 21 August fight will go on

Paradigm can still stop the fight as it awaits another ruling in the Superior Court of California.

Schwarm made the tentative ruling on the basis that the “evidence demonstrates a low probability of prevailing.”

According to ESPN, the ruling was in regard to two of Paradigm’s accusations: breach of contract and breach of implied covenant of good faith and fair dealing.

The case that Paradigm filed originated from its allegations that Pacquiao breached their earlier agreement wherein he would supposedly fight welterweight contender Mikey Garcia.

Paradigm claimed that Pacquiao’s camp brokered with the Premier Boxing Champions and Spence without its president Audie Attar, despite them holding exclusive rights to negotiate the Filipino’s fights.

Attar and Paradigm are also suing to recover a $3.3 million advance that they paid Pacquiao with the understanding that they would be responsible for handling the eight-division world champion’s next two fights.

Pacquiao signed with Paradigm in 2020 in hopes of securing a potential crossover match with UFC superstar Conor McGregor, who is signed with the management company.