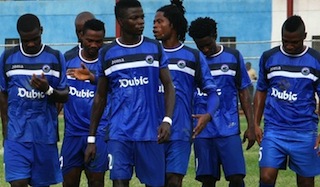 Enyimba Football Club of Aba beat Dolphins of Port Harcourt 2-1 to lift the 2014 edition of the Federation Cup in an epic final played at the mainbowl of Teslim Balogun Stadium, Surulere, Lagos on Sunday.

Enyimba’s two goals were scored by Mfon Udoh in the 52nd minute and Chinonso Okonkwo in the 73rd minute of the second half.

Dolphins could only salvage a consolatory goal when Emem Udouk halved the deficit in the 80th minute, as he latched onto an Isiaka Olawale’s pass and slided home the goal for the Port Harcourt team.

Captain of the victorious Enyimba, Chinedu described the performance of his team as great, adding that they were so glad to have won the Federation Cup.
Dolphins’ lone goal scorer and the player who scored 23 goals in the Nigeria League, Eduok said his team loss due to the failure of the players to covert many begging chances to goals.

Eduok was however awarded the Most Valuable Player, MVP, award of the match.

The host, Governor Babatunde Raji Fashola, in company of the President of Nigeria Football Federation, NFF, Amaju Pinnick, presented the Federation Cup trophy to the captain of the new champions, Odoji, who presented it to the chairman of the club, Anyansi Agwu.