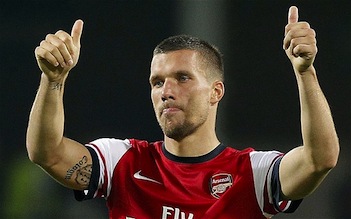 Arsenal’s Germany forward Lukas Podolski has repeated his frustrations at being kept on the Gunners’ bench, heightening speculation he may leave in January’s transfer window.

“I like London, I like the club, but I don’t like the situation,” he told German magazine Kicker having again sat on the bench for Arsenal’s 2-1 home defeat to Manchester United.

“I’m not some clown who can sit out his contract in the stands.”

Podolski, who has an Arsenal contract until 2016, has said he will seek talks with coach Arsene Wenger before the January transfer window opens.

The German has made just eight appearances for Arsenal this season, only one of which was over 90 minutes, but Wenger has said Podolski is not for sale.

Earlier this month, Germany coach Joachim Loew told World Cup winner Podolski to consider his Arsenal future if he wants to keep his place in the national squad after 121 appearances.

Loew gave Podolski a rare start in Germany’s 4-0 win over minnows Gibraltar in a Euro 2016 qualifier ten days ago, but he failed to shine in a poor team performance.

“The fun of the game is being taken out of me at Arsenal,” he said at the time. “I’m a true-blood footballer and want to play.

“Now, I have even noticed that I’m missing something if I’m not playing regularly.”

The former Bayern Munich and Cologne striker has not ruled out a return to the Bundesliga and has been linked to Wolfsburg in Germany’s top-flight.