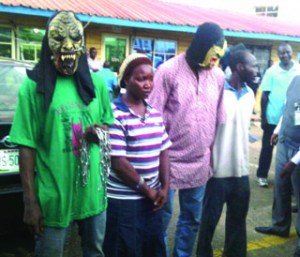 A 43-year-old suspected kidnapper who has been arrested by the police has confessed that his gang collected N20 million from an oil magnate and he got a share of N2.5 million from the deal in Lagos State, western Nigeria.

The suspect, Chukwuma Kinsley, was arrested with Kelvin Igah and his wife, Ogechi and Kelvin’s younger brother, Victor Igah whose role was to keep the victims in captivity at their two-bedroom flat located at 18, Odeniyi Ishola Street, off Bola Road, Isheri Oshun, Lagos.

Kinsley confessed that his gang kidnapped the Director of Dapsey Oil, Chief Idowu Coker and collected N20 million ransom and he promised to pay the remaining of N10 million balance before they were arrested.

He said it was after they kidnapped another oil magnate, Alhaji Fashola Hammed, that the police nabbed them.

The three suspects and Ogechi were paraded by the Commissioner of Police Lagos State Command,  Mr Kayode Aderanti, on Wesdenesday at Ikeja, Lagos Command.

Aderanti said he received information  about the kidnapping of Alhaji Hammed Fashola, 55, owner of Kings Petroleum and that the kidnappers were demanding N50 million ransom.

He said he immediately directed operatives of SARS led by Abba Kyari to take action.

He said Fashola was rescued from their hideout at 18, Odeniyi Ishola Street, off Bola Road, Isheri Oshun, Lagos, and four of the suspects were arrested. Other gang members are said to be at large.

Aderanti said that the suspects confessed to series of kidnapping within the Lagos metropolis and the police are making efforts to arrest the remaining gang members.

Coker and Hammed were kidnapped at Igando and Egbeda areas respectively by the gang and kept in a toilet.

Coker spent nine days in captivity before he paid the ransom and regained his freedom, while Hammed spent four days before the police rescued him and arrested the suspects.

Aderanti said the police will continue to work hard to reduce crime, especially kidnapping and armed robbery, to make Lagos a crime-free state.