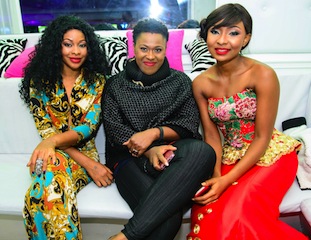 Uche Jombo (C) takes a pose during the US premiere

After the successful premiere of Folly in the United States, the blockbuster film produced by Elizabeth Daniels, starring popular screen goddesses, Uche Jombo, Yvonne Nelson and Joke Silva is set to take over Nigerian cinemas.

The highly rated film is finally coming to Nigeria, following its premiere in America and other parts of the world. On 1 November, Folly serenaded the heart of Big Apple, Manhattan, and the following day, it was the talk of the town as it was also premiered in DC, all in the United States.

Uche Jombo, Yvonne Nelson and Alex Ekubo were among the Nigerian movie stars who made it to the States for the double premieres. Folly got a huge applause and rating from the audience, White movie buffs in particular.

The US premiere was held on a Yacht. It was cruising in the beautiful City of Manhattan while fans eat, drink and watch the movie, Folly.
Directed by Alex Mouth, Folly tells the melancholic story of love and sweet life gone sour. It highlights the thin line between promises and betrayal, how a harmless, thoughtless action can alter lives forever.

You can watch the trailer of the film here: