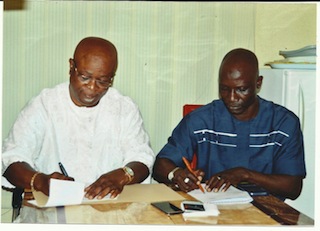 Speaking at the signing ceremony at the club’s secretariat in Umuahia on Thursday, Chairman of Abia Warriors FC, Chief Emeka Inyama said the board and management were satisfied with Bosso’s performance in his first season with the club and decided to renew his contract for the sake of continuity.

According to him, the club placed 7th at the end of the season with 58 points, became the only team to win three away matches and scored 51 goals which was only bettered by three-time champions, Kano Pillars who had 57. He described this performance as massive.

He said Bosso will still work with all his backroom staff which have been left intact for the forthcoming season, describing Abia Warriors as one of the three best managed clubsides in Nigeria as the club is run with international standards.

Chief Inyama, who promised that the management will continue to support the technical crew, expressed confidence that the club will consolidate on its achievements in the forthcoming season and commended Governor T.A. Orji for his financial and moral support to the team.

In his speech, after putting pen to paper to handle the premier League outfit for yet another season, Ladan Bosso, who has been highly itinerant in the domestic scene, said he decided to remain with Abia Warriors not for pecuniary reasons but to pay back for the love and support the people gave him in his first season through an improved performance.

The former Niger Tornadoes, Wikki Tourists, Kano Pillars and Bayelsa United’s tactician said he was satisfied with the way Abia Warriors is run and will contribute his quota in making the club a household name in Nigerian Football.

Bosso lamented that despite winning unassailable three away games during the season, Abia Warriors could not still hit the continent and attributed this to ill-luck and some other human errors which will be corrected next season.

“We will work together again with the management to achieve better results next season,” Bosso promised and commended the management for retaining his backroom staff.

The Niger State-born coach revealed that some players who did not live up to his expectations will be shown the exit door, while more energetic and young players have been penciled down to strengthen identified areas of need, assuring that no Abia Warriors player of note will be snatched by other clubs.