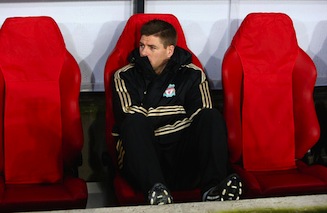 Liverpool captain Steven Gerrard was dropped to the bench for Saturday’s Premier League clash against Stoke City on the 16th anniversary of his Reds debut.

Gerrard had played the full 90 minutes against Crystal Palace and Ludogorets Razgrad already this week and Liverpool manager Brendan Rodgers decided to rest the veteran midfielder on a milestone day which saw him featured on the front of the matchday programme at Anfield.

The 34-year-old, who has been well below top form for much of the season, was replaced by Philippe Coutinho, with left-back Jose Enrique taking the place of Javier Manquillo from the side which drew 2-2 away to Ludogorets in the Champions League on Wednesday.

Rodgers had already risked irking Gerrard earlier this season when he left him on the bench for a glamour Champions League tie at Real Madrid.

“We have lots of game in a short period of days so we’ve just made a few changes to freshen up the team,” Rodgers said.

“Steven Gerrard has been a fantastic player and still is, but at this stage of his career he can’t play every game.”