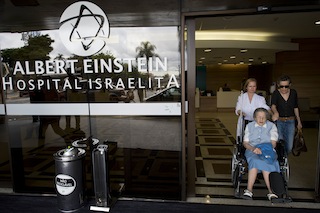 View of the main entrance of the Albert Einstein hospital where Brazilian football legend Edson Arantes do Nascimento, known as Pele is hospitalized in Sao Paulo

Brazil legend Pele was still receiving intensive kidney treatment on Saturday but his condition is improving, said the Sao Paulo hospital that is treating him.

“The condition of patient Edson Arantes do Nascimento (Pele) is improving, he remains in the intensive care unit receiving kidney treatment,” read a statement from the Albert Einstein Hospital.

The statement added that Pele was continuing to undergo hemodialysis, a procedure that involves filtering a patient’s blood through an artificial kidney that cleans it before returning it to the body.

The 74-year-old “is lucid and talking” and is “stable”, the statement said, adding that he was continuing to receive treatment with antibiotics and that “all tests (of his blood and urine) are negative”.

Certain local media had been reporting since Thursday night that ‘O Rei’ (The King) was suffering from septicaemia after not responding to the antibiotics and described his condition as “delicate”.

Pele, whose real name is Edson Arantes do Nascimento, is widely regarded as the greatest player of all time.

He was admitted to hospital on Monday, diagnosed with a urinary infection and given intravenous antibiotics.

On Thursday, the hospital said he had been placed in intensive care after his condition became “clinically unstable,” causing widespread alarm.

But Pele insisted on social media that he was fine and had simply been moved to another room for more privacy.

“I want to take this opportunity to let you know that I am doing fine,” he said in posts to his Facebook and Twitter accounts.

“I am blessed to receive your love and support, and thank God this is nothing serious.

“I was simply relocated to a special room within the hospital for privacy purposes only. While I appreciate all the visitors that came to see me, I really need to continue my treatment and recovery in peace.”

Pele initially underwent surgery for kidney stones at the same hospital on November 13.