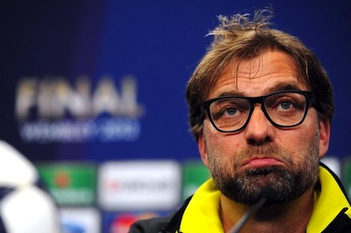 Jurgen Klopp insisted Sunday he will not quit as Borussia Dortmund coach despite his team suffering their eighth league defeat of the season to remain bottom of the Bundesliga.

Dortmund crashed 2-0 at Eintracht Frankfurt as Klopp’s men continued to frustrate fans who have seen the team, in stark contrast, ease into the Champions League last 16.

Last season’s runners-up are suffering their worst ever start to a German league season and the 2013 Champions League finalists are the only team in Germany’s top flight to have lost eight of their 13 matches.

But when asked if he has thoughts of walking away, Klopp insisted he will stay, despite his side being whistled and booed after the final whistle.

“I can understand journalists have such thoughts, but things aren’t heading that way, I am responsible for what is going on here,” a visibly dejected Klopp, who is under contract until 2018, told Sky.

“If it was only a question of luck and a change of coach would make a difference, you only have to call me and I won’t stand in the way.

“But as long as no-one comes to me and says ‘we have someone who can do better’, I simply can’t leave.

“I am not standing in the way, but I simply can’t go until there is a better solution. The responsibility is too big.”

Having steered Dortmund to back-to-back German league titles in 2011 and 2012, including the club’s first league and cup double, Klopp is facing the biggest test of his six-year reign.

Frankfurt captain Alexander Meier claimed his eighth goal of the season to become the league’s top scorer when he fired home with five minutes gone after team-mate Marco Russ split the Dortmund defence with a long-range pass.

Then a poorly mis-timed header back from defender Matthias Ginter on 78 minutes compounded Dortmund’s problems as it allowed Swiss striker Haris Seferovic to beat Borussia goalkeeper Roman Weidenfeller in a sprint to tap the ball home.

Dortmund had already dropped back to the bottom of the table on Saturday after both Werder Bremen and Stuttgart picked up wins.

Werder Bremen’s 4-0 hammering of Paderborn and VfB Stuttgart’s 4-1 win at Freiburg on Friday saw them both leapfrog Dortmund.