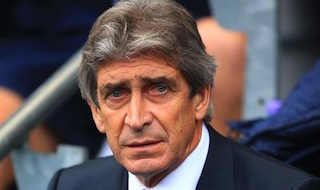 Manchester City manager Manuel Pellegrini praised his side’s all-round display after they overcame a disallowed penalty appeal and a red card shown to Eliaquim Mangala to win 3-0 away to Southampton on Sunday.

“We beat a very good team. They were second in the table and deserved that position.

“They had just one chance in the 90 minutes and that is important for the trust in our team, and to score three goals against the best defence is also very important,” the Chilean added.

Yaya Toure opened the scoring in the 51st minute at St Mary’s Stadium before centre-back Mangala was sent off for a second bookable offence.

Goals in the final 10 minutes from substitute Frank Lampard and Gael Clichy secured victory for the visitors.

Despite an ultimately convincing scoreline, some of the shine of victory was removed for City after a late injury to Vincent Kompany meant they finished the game down to nine men.

“We cannot know if Vincent Kompany has a problem with his hamstring, we will see with the doctor tomorrow,” Pellegrini said. “It was a precaution, we will see if it is a cramp or injury.”

This loss represented a first home defeat since April for Southampton, the surprise package of the Premier League season so far.

“You know that if you do some mistakes you are punished for that,” said Southampton manager Ronald Koeman.

“It was not good enough today and we have to realise that,” the former Dutch international added.

Sunday’s other Premier League match saw Tottenham Hotspur come from behind to beat Everton 2-1 at White Hart Lane in a match where Spurs striker Roberto Soldado scored the winner to end his near 10-hour wait for a goal in all competitions.

Then, in first-half stoppage-time, former Valencia forward Soldado kept his composure to beat Everton goalkeeper Tim Howard with a low shot after a fine pass from Aaron Lennon.

His strike meant Soldado ended a run of 593 minutes without a goal.

Chelsea, who remained unbeaten, dropped points for only the third time this season after they were held to a goalless draw at Sunderland on Saturday.

“It was a difficult match,” said Chelsea manager Jose Mourinho. “Only one team tried to win from the beginning, the other team didn’t. They defended a lot and they defended well.”

“The players were absolutely incredible,” said Liverpool manager Brendan Rodgers. “We fully deserved it and to keep a clean sheet against a very good side was pleasing.”

Robin van Persie scored only his fourth goal for Manchester United this season as the hosts cruised to a 3-0 win over Hull at Old Trafford.

“It was the best match of our season. What pleased me most was the way we dominated the game from the first minute to the last minute,” said United manager Louis van Gaal.