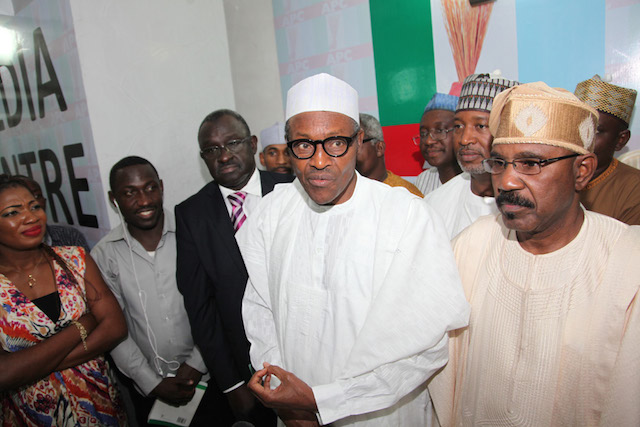 After he was screened and cleared by the All Progressives Congress, APC Screening Committee headed by Dr. Ogbonaya Onu at the party’s National Secretariat at 40 Blantyre Street, Wuse 2, Abuja, Muhammadu Buhari emerged from the screening chambers with heightened optimism Tuesday evening.

He also declared: “My morale is high’.

Buhari arrived at the venue of the screening exercise at 4.40 PM, and was in the screening chambers at the top floor of the Secretariat till 6.30 PM.

After the screening session was over, Buhari responded to questions from the media.

The retired Army General and former military Head of State declared that he is ready to work with whoever emerges tops after the primaries.


According to Buhari, the APC’s National Working Committee in charge of the coming convention to determine the venue for the Primaries is making necessary consultations presently towards choosing the appropriate venue.

Buhari has been busy stepping up his approval ratings in Nigeria’s northern axis recently, seeking even more concrete support for his ambition to become Nigeria’s next president.

He returned to Abuja for the screening exercise after a visit to Kano, Kebbi and Sokoto States yesterday, 1 November, 2014 for consultations with northern leaders. The Kano visit was used to sympathise with the government and people of the state over the multiple blasts at the Kano Grand Mosque last Friday. He also visited the Emir of Kano, Muhammed Sanusi ll and the hospital where the injured victims of the blast were receiving treatment..

Before departing the Venue of the screening exercise, Buhari said: “We have gone round to ask for the support that we need. The aspirants are now reduced to five and one of us will fight against the incumbent next year. My morale is high.”.