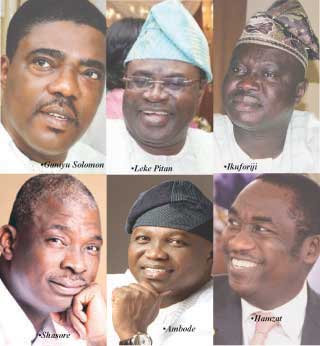 There was tight security at the Onikan Stadium, Lagos, southwest Nigeria, Thursday as delegates of the All Progressives Congress, APC, converged on the stadium to select a candidate to represent the party in next year’s governorship election in Lagos.

The atmosphere was charged but peaceful as hundreds of security personnel were deployed to maintain peace and order, while street urchins were kept away from the venue.

As at 12:45pm, accreditation was still ongoing while the voting proper had not begun.

Delegates were made to be on a single queue during their accreditation.

Anti-bomb experts were on ground to screen delegates and people entering the Onikan Stadium.

Over 3000 delegates are expected to vote at the primary to select a candiate for the party among the 12 contesting for the position.

At about 12.59pm, one of the leading aspirants, Akinwunmi Ambode arrived the venue of the primary to a tumultous reception as the party leadership announced the closure of accreditation in preparation for the commencement of voting.

Lagos State Governor, Babatunde Fashola and National leader of APC, Asiwaju Bola Tinubu were still being expected at the venue at the time of this report.

Other APC leaders at the venue were state Chairman of the party, Chief Henry Ajomale, Dr Olorunnimbe Mamora, Olufemi Pedro, Gbenga Ashafa, Abiodun Ogunleye, Alhaji Rafiu Jafojo, Adejoke Orelope-Adefulire, among others, while Lagos Commissioner for Police, Kayode Aderanti was at the venue to supervise his men to maintain adequate security.

The results of the primaries will be announced later in the day.

Akinwunmi Ambode: Born 14 June, 1963, Ambode, an accountant, administrator and public finance management expert, resigned from the government of Lagos as the Accountant-General of the State.

One major achievement going for the Chief Executive Officer of Brandsmiths Consulting Limited, a firm that specializes in public sector finance management, was his ability to effectively manage the finances of the state at the harsh period when former President Olusegun Obasanjo sat on the allocation to Lagos State allegedly because of a tussle he had with then Governor Bola Tinubu over the creation of the 37 Local Council Development Areas.

Obafemi Hamzat: Believed to be one of those very close to Governor Babatunde Fashola, Dr. Kadri Obafemi Hamzat, popularly known as Femi Hamzat, is the state Commissioner for Works and Infrastructure.

The former Commissioner for Science and Technology has partly been credited as one of those who helped the Fashola government record much success in the area of infrastructural development.

Olasupo Shasore: Born on 22 January, 1964, this Senior Advocate of Nigeria, SAN, and Litigation Partner at Ajumogobia & Okeke, a leading commercial law firm in Nigeria, was Attorney General and Commissioner for Justice in the state.

Though out of government, the Fellow of the Chartered Institute of Arbitrators has continued to serve in various capacities. For example, he led the Lagos delegation to the 2014 Nigerian National Conference and at the conference, the delegation made a case for a ‘special status’ for Lagos while it also canvassed and achieved consensus on several recommendations among which was to restructure federal revenue allocation to create an increased distributable pool of funds for the states from the Federation Account. As Chairman and later Vice-Chairman of the Lagos State Procurement Agency (State Tenders Board) between 2007 and 2011, Shasore supervised the award and execution of all major infrastructure and capital projects in Lagos State, providing roads, hospitals, schools and housing.

Adeyemi Ikuforiji: A former lecturer at Wake Technical Community College in North Carolina, USA and Managing Director of Springfield Import and Export Procurement and General Contracting, Ikuforiji has been the Speaker of the Lagos State House of Assembly for almost a decade.

The Speaker who describes himself as a visionary leader with over twenty years leadership and managerial experience, contested the 2003 election into the Lagos State House of Assembly on the platform of Alliance for Democracy to represent Epe Constituency 1 and later emerged Speaker of the Assembly in December 2005.

He has since transformed the Lagos State House of Assembly, resulting in great changes in its operation and administration and making it more efficient.

Ganiyu Olanrewaju Solomon: Born on 19 December, 1959, this politician was elected Senator for the Lagos West Federal Constituency of Lagos State taking office on 29 May 2007. He has been in the Senate since then.

Solomon has been a politician most part of his life, starting with an election into the State House of Assembly on the platform of Democratic Party of Nigeria (DPN) in 1998. He did not however take his seat before Abacha’s death.

In 1999, Solomon was elected chairman of Mushin Local Government Area of Lagos State on the platform of Alliance for Democracy. In 2003 he was a contender to be AD Senate candidate for Lagos West, but was defeated by the incumbent Senator Tokunbo Afikuyomi.

The grassroots politician later became a member of the House of Representatives, from where he went to the Senate.

He has also held various national and international positions since then.