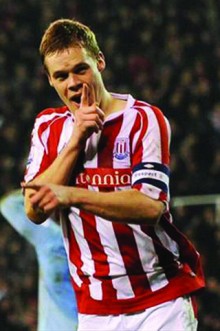 Stoke City captain Ryan Shawcross has warned Arsenal that they should expect a hostile reception when they arrive at the Britannia Stadium on Saturday afternoon.

The Gunners have won just once in seven trips to the ground since the Potters were promoted in 2008, and Shawcross believes that his side will be back to their best after a 2-1 loss to Manchester United in midweek made it three successive defeats in the Premier League.

“The pressure is building for us to get some points, but it’s Arsenal at home and our record is very good against them at the Brit,” the centre-back told reporters.

“The fans dislike Arsenal so it’s going to be a tasty game. Hopefully the atmosphere will be buzzing and we can get three points.

“If we play like we did at Manchester United or even better we can beat Arsenal. We’ve played well against the big teams and hopefully we can make the Britannia a fortress again.” Stoke are currently 13th, just three points above the relegation zone.

Meanwhile, Arsene Wenger has urged Arsenal to show the progress they have made when they start “a very important period” with a trip to Stoke City.

Arsenal turn their attention to trying to secure a first win at the Britannia Stadium since February 2010, having gone four games without victory there since a 3-1 success that was marred by Aaron Ramsey’s horrific leg break.

Wenger is grateful his side can head into the clash with Mark Hughes’ side knowing they have already qualified for the last 16 of the UEFA Champions League with a trip to Galatasaray to come next Tuesday.

But the trip to Staffordshire marks the beginning of a two-week spell in which Arsenal face four games.

“It is a very important period but one thing is for sure – we are not under huge pressure for game number six in the Champions League,” the Frenchman told Arsenal’s official website.

“The week we had behind us and the week we have now, to go to Galatasaray for a decisive game would be very difficult.

“At least we are not under massive pressure there so let’s focus on our next game at Stoke. It is a difficult place for us to go but let’s show there that we have improved and we can deal with it.”