NPA Open: Enosoregbe, Agugbom Land In Finals As Babalola Bows Out In Doubles 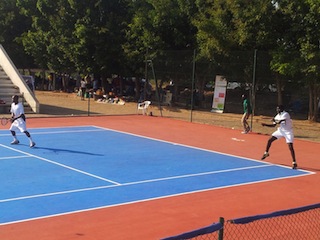 R-L: Abdulmumuni Babalola returns a serve during his doubles match with Taiwo Owolabi against the pair of Lawal Shehu and Candy Idoko at the ongoing National Ports Authority, NPA Open at the Package B Arena of the stadium in Abuja. Babalola's team lost, 7-5, 7-5. Photo: Damilare Okunola

Nigeria’s number one male tennis player, Clifford Enosoregbe lived up to his pre-tournament billing by fighting his way to the final of the Nigeria Ports Authority, NPA National Tennis Open which will end today.

Enosoregbe defeated youngster, Joseph Imeh 6-0, 6-2, in a one-sided affair to make up for his quarterfinal loss at the Governor’s Cup Lagos Tennis Invitational Championship.

“It was an exciting match for me and I gave it my very best shot. From here, we are going to Kano which is really good for tennis in our country.

“I hope that we can have more tournaments in quick successions like this so that our players can be fit and strong enough to match up with our foreign counterparts,” the Edo-based tennis star noted.

In the other semifinal match, emerging star, Emmanuel Idoko won 6-1, 7-6(8) against Candy Idoko to set up a final clash with much-fancied Enosoregbe.

In the Women’s Singles, Osareimen Airhunwunde created an unlikely upset by defeating former Champion, Blessing Samuel, 6-4, 6-1 and will play against Christie Agugbom, who also defeated number one seed, Sarah Adegoke, 2-6, 6-2, 6-2.

The Women’s Doubles final saw the pair of Agugbom and Samuel defeat former Champions and wild card entrants, Osaro Amadin and Margeret Olagundoye, 6-3, 7-6(3) to emerge the first champions of the doubles event.

And the pair of Lawal Shehu and Candy Idoko beat Abdulmumuni Babalola and Taiwo Owolabi 7-5, 7-5 to win the Men’s Doubles title.