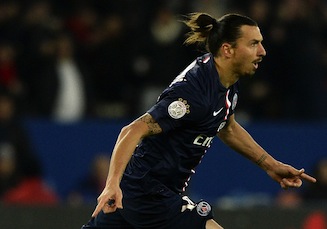 Paris Saint-Germain leapfrogged Marseille into top spot in Ligue 1 on Saturday by coming from behind to beat Nantes 2-1 at the Parc des Princes thanks to a Zlatan Ibrahimovic brace.

Nantes had led thanks to a stunning early strike by United States international Alejandro Bedoya, but Ibrahimovic equalised before the interval and then got what proved to be the winner with a ferocious free-kick three minutes after the restart.

The result maintained PSG’s unbeaten record this season — the only one left in Europe’s leading leagues after Premier League leaders Chelsea lost earlier in the day — and allowed the defending champions to move provisionally two points clear at the top of Ligue 1 before rivals Marseille host Metz on Sunday.

Laurent Blanc’s side had been held at Lille in midweek but they bounced back to make it just one defeat in their last 39 home league games despite several leading players being rested ahead of Wednesday’s Champions League clash with Barcelona.

Nevertheless, Blanc was not entirely satisfied, saying: “Nantes posed us problems all over the park and deserved their goal. That woke us up. The essential thing is to win but we will have to be much more aggressive and determined in Barcelona.

“I managed this match with one eye on the next game. It’s ok because we won but sometimes we are playing with fire.”

Of his team’s unbeaten record, Blanc added: “It doesn’t give you anything, no extra points, no qualification for any competition. It just means that you are having not too bad a season.”

Scorer of eight goals in his last nine games, Edinson Cavani was left on the bench at kick-off along with David Luiz and Blaise Matuidi.

The Canaries began the day in eighth place after back-to-back defeats had seen them slip down the table, but they opened the scoring just eight minutes in.

Paris lost possession inside their own half and the ball eventually came to Bedoya, who took a touch 25 yards from goal before arrowing a superb shot into the top left-hand corner of the net.

Nantes were looking for their first win at the Parc des Princes since 2002 and were unlucky not to be further in front in the 12th minute when Papy Djilobodji turned in a Jordan Veretout free-kick only for the referee to disallow the goal for a foul that was not clearly visible on replays.

“I don’t see where the foul was, there was nothing at all,” said Nantes coach Michel Der Zakarian. “It would have been 2-0. Would they have been capable of scoring three goals after that? I don’t know.”

The incident proved a turning point as PSG drew level on 34 minutes, Ibrahimovic converting a low ball in from the right by Lucas.

Thiago Silva then came close to putting the hosts ahead on the stroke of half-time with a header from Ezequiel Lavezzi’s free-kick that was well saved by Remy Riou.

However, Ibrahimovic struck again on 48 minutes, his thunderous dead-ball hit from 25 yards taking an identical trajectory to Bedoya’s earlier effort on its way into the net.

The Swede’s eighth league goal of the campaign proved enough to secure the points, although Lucas and Lavezzi both passed up opportunities to increase the advantage.

Giant Malian striker Cheick Diabate scored twice as Bordeaux fought back to beat Lorient 3-2, but Rennes were humbled 4-0 at home by Montpellier as they lost for the first time since September.

Nice came from behind to win 3-2 at Caen, while on Friday Dimitar Berbatov scored twice, including once from the penalty spot, as Monaco won 2-0 at Toulouse to warm up perfectly for Tuesday’s home Champions League clash with Zenit St Petersburg, in which a draw will be enough to take them through to the last 16.