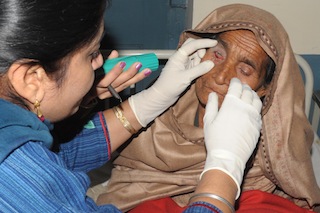 An Indian doctor inspects the eye of a patient

Doctors may be able to restore the vision of at least six of the 20 people blinded by botched free cataract surgery in northern India, a government official said on Saturday.

Authorities have suggested poor surgical hygiene may be to blame for the loss of sight after what are normally considered low-risk operations, in the latest scandal to highlight poor medical care in parts of India.

But now a special team of doctors dispatched from New Delhi and Punjab state capital Chandigarh say “at least six of the victims could get their normal sight back after special treatment”, senior Punjab state government official Ravi Bhagat told AFP.

Local media reports, however, say the number of people blinded could range from 30 up to as much as 60.

The cases have raised fresh concerns about the hygiene standards in India’s severely stretched health-care services.

The incident comes just weeks after the deaths of 13 women following sterilisation surgery at a camp in central India.

Government officials blamed tainted drugs for the deaths, but an independent report said the women had suffered septicaemia that could have been caused by lack of hygiene.

In the case of those having eye surgery, the organiser of the camp has been arrested on accusations of allegedly running the camp without government permission, police said, while the doctor who performed the cataract operations has been been held for questioning.

“Technical teams are questioning him (the doctor) on different aspects,” Singh said.

Punjab police were seeking to trace every patient operated on at the camp to ascertain the total number of victims.

A government doctor who treated the latest victims on Friday said they had contracted infections after undergoing the cataract surgery on November 4.

“They came to us in a very bad condition… the infection had already spread,” Karanjeet Singh told India’s NDTV news channel, adding “chances of restoring their eyesight” are as a result much lower.

Police said there could be more arrests in the cataract case.

“Our police team is leaving for Mathura in neighbouring state of Uttar Pradesh, where the NGO (non-governmental organisation) has its headquarter,” Singh said.

“In Mathura, we hope to get the names of all the other people directly responsible for this illegal camp,” he said.