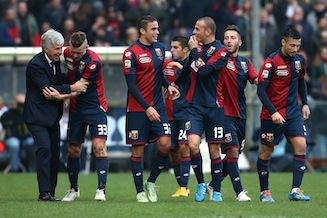 Genoa moved up to third ahead of stuttering Napoli with a battling 1-0 home win over AC Milan thanks to Luca Antonelli’s first-half header which handed the Rossoneri their first away defeat of the season on Sunday.

Genoa welcomed Filippo Inzaghi’s men to the Luigi Ferraris stadium looking to stretch their unbeaten run in Serie A to nine games and had plenty of incentive after Napoli were held 2-2 by Empoli earlier in the day.

Milan had been unbeaten in their last eight outings with Genoa, a run which included six wins and two draws, but despite welcoming Riccardo Montolivo back to the fray an uninspired Rossoneri failed to spark.

After just eight minutes Menez had space on the left but after a mazy run in towards midfield saw his dipping drive from the edge of the area caught by Mattia Perin.

El Shaarawy then had a free header on goal from Pablo Armero’s delivery from the left, but Perin was quick to save at his near post.

Just before the half-hour Menez dispossessed Juraj Kucka on the right but failed to beat Perin from 12 metres out with the keeper diving low to block.

Antonelli broke the deadlock on 32 minutes when, despite Daniele Bonera’s attempt to block with his foot, the left-back got his head to a dipping corner to beat Diego Lopez at the keeper’s near post.

Philippe Mexes came close to levelling just before half-time but saw his header at the back post caught by Perin.

Milan were living dangerously at the back and a poor clearance from Armero a metre from Lopez’s near post almost gifted Genoa their second.

It went straight to Diego Perotti, whose first-time effort was blocked by Bonaventura on the goalline.

Milan failed to threaten in the second half and as the victory drew near Genoa shut up shop at the back.

But Genoa held on for a precious win that has left them currently occupying the league third and last Champions League spot, with a nine-point deficit to leaders and champions Juventus.

So far, Genoa are the only team who started among the top five this weekend to win.

Juventus, held to a scoreless draw at Fiorentina on Friday, lead Roma by three points after Rudi Garcia’s men battled for a 2-2 draw at home to Sassuolo on Saturday.

Napoli dropped to fourth two points adrift of Genoa after a listless 2-2 draw at home with Empoli.

Elsewhere Sunday Lazio ran out 2-1 winners at Parma, who found out just before the game the club is on the verge of being sold — possibly to buyers from Russia and Cyprus.

Raffaele Palladino opened the scoring for the hosts on the stroke of half-time, only for Lazio captain Stefano Mauri to level in the third minute of added-on time.

Felipe Anderson struck on the hour for Lazio to secure the points which moved them up to fifth.

Sampdoria dropped to sixth, but can go fourth to trail city rivals Genoa by just a point if they account for Verona on Monday.

Inter, currently 18 points behind Juventus, host Udinese in Sunday’s late game looking to avoid a defeat that would leave them in 12th spot.