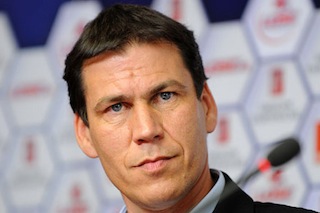 Roma’s decisive final Champions League group game with Manchester City on Wednesday is “like a Cup final”, coach Rudi Garcia said on the eve of the match.

Roma, who finished second in Serie A last season in Garcia’s first campaign in charge, can ensure they reach the knockout stage for the first time since the 2010/11 season by beating City.

A draw would also be enough, depending on the result in the other Group E encounter between CSKA Moscow and section winners Bayern Munich.

Frenchman Garcia, who coached Lille to a domestic double in 2011, said his side had already done brilliantly to still be in contention for a place in the last 16 but is hoping they can get the win that would guarantee progress.

“Every game is important although tomorrow’s will be special because it’s like a Cup final,” said the 50-year-old Garcia at the eve-of-match press conference.

“We should have been out of it by now because we were in the fourth pot (of seeds) when the draw was made.

“The fact we’re still in the hunt shows we have quality. Credit to us that we have the chance to play this cup final in a fiery atmosphere at the Olimpico. We need to make the most of every moment tomorrow. We’ll try and pull it off, a win would be incredible.”

Garcia, whose side currently lie second in Serie A behind champions Juventus, said he had every confidence his players would be able to handle the pressure, although they have already shown how frail they can be at home when they fell apart and lost 7-1 to Bayern earlier this season.

“I coach my players every day and I know their mindset and what they’re capable of on the pitch,” said Garcia.

“We’re in the hardest group in the entire Champions League and to be in with a shout of qualifying going into the final game was something we hoped and thought possible.”

Garcia, who twice failed to get Lille out of the group stage in the competition, said his team were focused solely on beating City rather than worrying about the result in Munich.

“There’s no other option tomorrow – we have to go for the win and nothing else,” he said.

“We only have our fate in our hands if we win. We can’t know what will happen between Bayern and CSKA. The German side didn’t win their fifth match and that could be the case with their sixth too. The only possible scenario for us is to score one goal more than City and win the game.”

City head to Italy without talisman Sergio Aguero, who has scored 19 goals this season, after he damaged knee ligaments in the weekend Premier League win over Everton.

That provides a major boost to Roma’s prospects of going through, although Garcia said: “Aguero’s absence is bad news.

“Great players like him should be involved out there and I’m disappointed I won’t see him at the Olimpico tomorrow.”

Garcia added that reaching the knockout stages would be a deserved reward for the work his players have put in.

“Tomorrow’s game is not just special for me personally, everything we’ve achieved at Roma thus far has been a team effort.

“In the last few years the club didn’t even make it into Europe and now we’re in the Champions League.

“Our aim was to play in this competition in front of a big crowd like there’ll be tomorrow and now we would like to go through and dedicate that success to our supporters.”