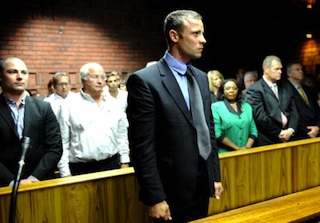 Pistorius : in the dock

A South African judge on Wednesday cleared the way for prosecutors to seek a murder conviction against Oscar Pistorius, enabling an appeal that could dramatically increase his punishment for killing his girlfriend.

Prosecutors welcomed the decision, which could see the Paralympian star sprinter receive a jail term of at least 15 years if the appeal is approved rather than the five years he was sentenced to for manslaughter.

“Our argument was that he should have been convicted of murder, and then would have been sentenced to a minimum sentence of 15 years,” said the National Prosecuting Authority’s Nathi Mncube.

Original trial judge Thokozile Masipa granted prosecutors the leave to appeal, saying she could not rule out the prospect that a challenge would succeed in the Supreme Court of Appeal.

Pistorius, 28, said he shot his model girlfriend Reeva Steenkamp four times through a locked toilet door in the early hours of Valentine’s Day in 2013, believing she was an intruder.

Prosecutors argued that he deliberately killed the 29-year-old law graduate after an argument, and were furious that he could spend less than a year behind bars if granted home leave.

A lawyer representing Steenkamp’s parents Barry and June said the couple felt that “justice must run its course — they’re out of it now”.

“Really it’s got nothing to do with them at this time,” Dup de Bruyn told AFP by telephone.

“They don’t even want to try to influence it or say anything about it. They want to carry on with their lives, it’s as simple as that actually.”

The double-amputee athlete’s father Henke Pistorius told AFP outside the court: “It should not have gone this far.”

But the long-estranged father added: “Oscar is strong, he’s strong, he has to be strong, he grew up like that. There’s lots of things in life, especially for a man like him that is not fair.”

“I was at the National Prosecuting Authority in Johannesburg when the decision came through, and the feeling is that it was critical to get leave to appeal in order to restore faith in our ability to prosecute criminals,” said Martin Hood, a criminal lawyer based in Johannesburg.

“I think that would be the general feeling of the legal community, because we need to know that our prosecution can do its job and can do it properly.”

“If the conviction is changed to murder then obviously the sentence will fall away and there will be a new harsher sentence,” said Hood.

“It’s anything between 15 to 25 years, but it’s up to the court’s discretion, there is no minimum.”

Stephen Seelane, a 55-year-old advocate who was in court for the decision, said the Pistorius case had given the public the wrong impression about the legal system.

“The public at large thought if you have money it means you can run away with murder and derail justice,” he said, a view widely shared by passers-by outside the court.

Earlier this week a South African court acquitted British millionaire businessman Shrien Dewani of killing his bride on their honeymoon in Cape Town, saying the prosecution’s case was severely lacking.

Pistorius, who celebrated his 28th birthday last month, has been serving his sentence in a central Pretoria prison since October.

Due to his physical disability, he is being held in the hospital ward of the prison, shielding him from the often brutal overcrowded cells, known for gang violence.

But his brother Carl disputed claims that Pistorius — who became a hero to millions when he competed against able-bodied athletes at the 2012 Olympics — is receiving special treatment.